AU swears in new officers, Moroccan king 'happy to be back home' 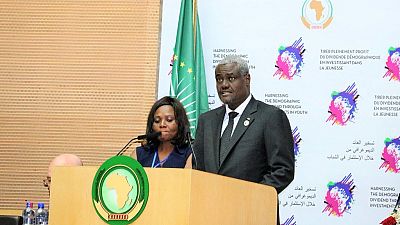 The African Union (AU) swore into office new officials who were voted on Monday, January 30, 2017, the first day of the 28th Heads of State Summit in Addis Ababa, Ethiopia.

Faki and his deputy, Ghana’s Ambassador Thomas Kwesi Quartey, took their respective oaths of office along with other commissioners in front of heads of states.

Following his re-election last night, Amb. Smail Chergui AU_Chergui has been sworn in as #AU Commissioner for Peace&Security for next 4 yrs pic.twitter.com/5T9Qdxz1of

Aside the election of a new AUC chairperson, Chadian president Idris Deby Itno also handed over to Guinea’s Alpha Conde as Chairman of the African Union. The AU also readmitted Morocco after the north African country left 33 years ago.

The Moroccan leader, King Mohammed VI, delivered an address after the readmission echoing the fact that their return was to engender unity and not to divide the AU.

‘‘It is a beautiful day when one returns home after too long an absence. Africa is my continent and my home and I am happy to see you. I missed you all,’‘ he said.