Who is Benoit Hamon? 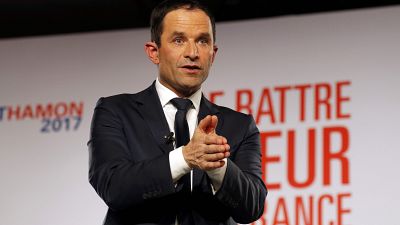 It’s easy to say it now with hindsight but Benoit Hamon’s swift rise to the top shouldn’t really be much of a surprise.

Even the most die-hard French Socialists agreed the party needed a shake-up so perhaps it’s fitting that the man few expected to be in the race has triumphed with his so-called “desirable future” project.

“A world that’s more equal, more fraternal, more fair. That’s the perspective that we’re opening. Some call it Utopian but we accept that because for us it’s real and we will show them our ideal vision.”

Well-known among the Socialist rank-and-file, Hamon was the party’s spokesman between 2008-2012.

He’d previously headed the Young Socialists and was an MEP; however, neither role propelled him into the public’s wider eye. When he announced his candidacy six months ago, it passed virtually unnoticed.

Still, that shouldn’t be taken as a sign of his popularity. Highly regarded within the party, Hamon spent time in government as deputy minister for social economy and solidarity.

In 2012, when Manuel Valls was made prime minister he promoted Hamon to education; but fundamental splits emerged shortly afterwards. When the dust settled, Hamon, Arnaud Montebourg, and Aurlie Filipetti had the economy and culture portfolios removed because of their opposition to the government’s plans.

But Hamon and Montebourg didn’t disappear quietly. They openly supported Christiane Taubira, the justice minister who resigned over government plans to remove French citizenship from convicted terrorists. Back then Montebourg was the overwhelming favourite to face Valls.

But once again, we should all now be getting used to how fast fortunes change in politics and Hamon’s hardline leftist views based on socialism and environmentalism have certainly touched a nerve, inside and beyond the party faithful.

“I take responsibility for saying today that what I’m proposing isn’t a option that can sell a dream. It’s not selling anything at all in fact, it’s about being fair and just,” said during the last televised debate.

Polls have suggested people thought he was more convincing than any of his counterparts in the run-off debates. Now, Hamon must prove himself again with wider electorate.