The end is nigh 'Doomsday Clock' ticks closer to midnight 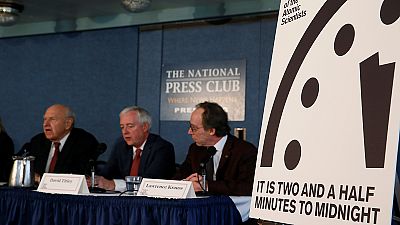 Scientists and scholars have moved the hands of the ‘Doomsday Clock”:http://thebulletin.org/overview, ‘ a symbolic countdown to the end of the world, to two and a half minutes to midnight.

The Doomsday Clock is now two-and-a-half minutes from midnight, the closest it's been to midnight since 1953. https://t.co/tk3LiShPB3 pic.twitter.com/6YZCeiLJV1

Every year the Bulletin of the Atomic Scientists that set the clock decideds whether the year gone by has pushed humanity closer to destruction.

The time is now the closet to midnight it has been since 1953, the year the first hydrogen bomb was tested.