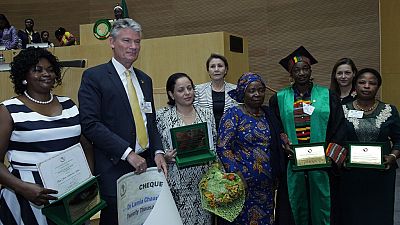 Africa’s top 5 female scientists for the year 2016 were honoured by the African Union (AU) at its headquarters in the Ethiopian capital, Addis Ababa earlier this week.

The winners were pooled from all the continent’s regions except Central Africa. West Africa had two recipients with East, North and Southern Africa completing the list with one each.

What is the award about and how much is it worth?

It is named after Ghana’s first President and celebrated Pan-Africanist, Dr Kwame Nkrumah. Under the initiative called Kwame Nkrumah Scientific Awards, scientists are awarded at national, regional and continental levels. The European Union (EU) has sponsored the event since 2009.

The EU strives for the fullest contribution from women to science, by ensuring gender equality and gender mainstreaming in research because encouraging gender diversity supports scientific excellence.

Each of the five laureates gets a $20,000 cash prize for their efforts. The AU launched the award in September 2008. The EU’s support for the programme is part of the EU-Africa collaboration in Science, Technology & Innovation (STI), under the Human Development component of the Joint Africa-EU Strategy (JAES).

Who are the award winners?

When did it take place?

The Kwame Nkrumah Regional Awards for women 2016 were presented on January 24, 2017 during the Opening Ceremony of the Gender Pre-Summit, of the 28th AU heads of states and government assembly in Ethiopia.

It took place in the presence of Dr. Dlamini Zuma outgoing Chairperson of the AU Commission. The EU represented by Ranieri Sabatucci Ambassador of the EU Delegation to the African Union delivered one of the five prizes.

The EU whiles extending congratulations to the five female laureates also noted that ‘‘the participation of women in research, their opportunities to contribute fully and their recognition, as well gender issues in research itself, are also an integral part of good research policy.

‘‘The EU strives for the fullest contribution from women to science, by ensuring gender equality and gender mainstreaming in research because encouraging gender diversity supports scientific excellence,’‘ an EU statement read.

The award scheme has a presidential history given that a previous laureate of the regional awards for female scientists is the current President of Mauritius, Professor Ameenah Gurib-Fakim, for her work in phytochemistry.