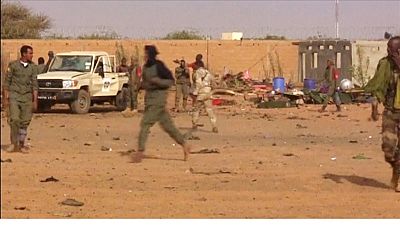 14 members of a pro-government militia were killed Saturday during in an attack blamed on former rebels.

The attack occurred three days after a suicide bombing by the jihadists against a group of rival factions that left about 80 dead.

A suicide blast targeting a camp in northern Gao housing former rebels and pro-government militia had left 77 dead and 120 wounded on wednesday , according to the report published Thursday by the UN Mission in Mali.

This is happening as former rebels from the Tuareg-led CMA movement is making preparations for a joint patrol with pro-government militia members for the peace deal.

The targets were said to be signatories to a 2015 peace accord struck with the government.
The attack was claimed by the Group of Algerian terrorist Mokhtar Bel Mokhtar,allied to Al-Qaida in the Islamic Maghreb (AQIM).

The north of Mali was under the control of Tuareg-led rebels and jihadist groups linked to Al-Qaeda in 2012. The Islamists sidelined the rebels to take sole control.

They were however largely ousted by a French-led military operation in January 2013.
The UN Security Council is considering setting up a sanctions regime for Mali against those hindering efforts to implement the 2015 peace accord.