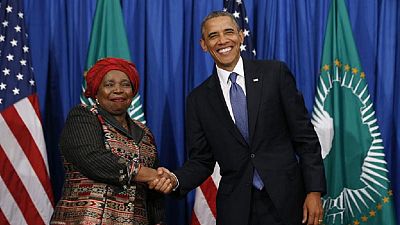 Barack Obama, the 44th United States president made Africa proud during his tenure as POTUS (President of the United States), this is the view of the African Union Commission (AUC) chairperson, Nkosazana Dlamini Zuma.

Dlamini Zuma lauded Obama’s African record whiles extending words of congratulations to his successor, Donald John Trump, who took his oath of office on January 20, 2017, to become the 45th POTUS.

She related the close cooperation between the AU and Washington and also between the US legislature stating that the continental political bloc was looking forward to working with the Trump presidency.

I look forward to realDonaldTrump's Admin's continued cooperation & interaction with #AU, for the mutual benefit of #Africa & the USA.

Obama in 2015 became the first POTUS to address the African Union at its headquarters in the Ethiopian capital, Addis Ababa. His administration also had academic, financial and empowerment programs specially designed for Africa.

His election as the President of the United States of America restored hopes in many Africans especially his father’s country Kenya. Barack Obama, as the first black President to the world’s superpower was seen as a descendant from Africa capable of understanding this continent better than his predecessors.

But having stayed eight years in power, will he still be relevant to this continent?

Macharia Munene, Professor of History and International Relations had this to say; ‘‘There has been more emotion than of action. We have seen a lot of hysteria, a lot of affection because it is of ours… but in concrete terms, there has been no large-thing to boost the economy. “

Within a period of 8 years as the president, Obama has visited Africa four times to address issues affecting youths in this continent. “I wanted to come here because that Africa exchange. The growth of Africa is one of the fastest in the world,” Obama told students in Kenya.

His Power Africa programme to double access to power in sub-Saharan Africa was designed to bring governments and the private sector together.

Obama, who has said that one of his greatest achievements in office was “taking out” Al-Qaeda leader Osama bin Laden, also took the fight against rising extremism to Africa. He however admits that the lack of planning after ousting Libyan leader Muammar Gaddafi remained his worst mistake as president.

Obama is generally seen as having advanced US interests in Africa and deepened relationships, not least by continuing his predecessors’ flagship projects. Obama organized the US-Africa Leaders Forum which held in Washington DC in 2014 and was well celebrated as the largest gathering of African leaders to be hosted by any US president.

I take the opportunity to also wish former President BarackObama & his family the very best. As the 44th POTUS he made us very proud. pic.twitter.com/fwwQUPnRdx