Vuvuzelas: a noisy but welcome return at AFCON 2017 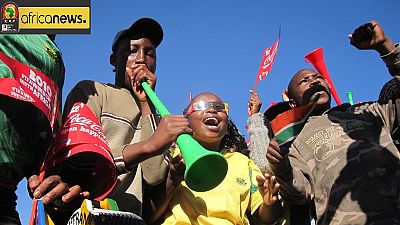 With the start of the 2017 African Cup of Nations, the very noisy vuvuzelas make their ways back to the stadiums, a comeback that is undoubtedly appreciated by soccer fans in Gabon.

Vuvuzelas – plastic horns – which blow loud monotone notes, shot to global attention seven years ago during the 2010 World Cup in South Africa. They were also very visible when South Africa hosted the AFCON in 2015.

The horns which come in different colours are a hot cake in host cities at the AFCON. In the capital Libreville, there are several sellers who offer them to motorists and passers-by at about 2000 CFA (equivalent of 3 euros).

The main issue with the vuvuzelas in South Africa centered around their disruption of sound recorders for the televised broadcast of the matches.

Africanews correspondent in Gabon reports that the blowing of these vuvuzelas by fans were largely interrupting with even police whistles responsible for regulating traffic. But for the many fans in the stadium, insofar as it gingers them up whiles watching football, they will continue to blow the trumpets.