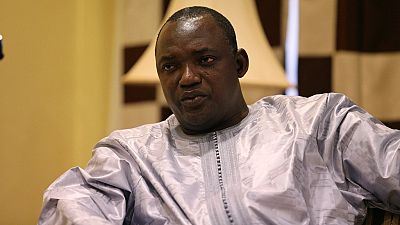 Fake news circulating on social media alleging the assassination of Gambia’s President-elect Adama Barrow has increased tension in the country facing uncertainty after refusal of outgoing president to step down.

The news linked to a fake news website and carried widely by blogs in Nigeria among others on Wednesday evening was widely shared on social media raising suspicions especially after news broke that Gambia’s army chief had pledged support for President Yahya Jammeh.

It took efforts from some members of Barrow’s team and journalists to denounce the fake news which had circulated widely.

“Mr Barrow and the entire members of the coalition are all here and going about their business. Gambians should ignore this rumours and continue with their preparations to inaugurate their president on January 19,” Gambian local media JollofNews quotes an unnamed member of the opposition.

Gambian journalist Fatu Camara also tweeted saying: “News circulating that President Elect Barrow is killed is fake. Barrow is well and safe, he finished a meeting a while ago”.

#Gambia..News circulating that President Elect Barrow is killed is fake.#Barrow is well and safe, he finished a meeting a while ago. pic.twitter.com/SVPLuYTOko

She however said there were reports that members of the coalition party were evacuating to safe houses due to threats by the authorities.

Adama Barrow is the third important personality to have been reported dead by a fake news website in three months after Africa’s richest man Aliko Dangote and South Sudanese President Salva Kiir.

The Nigerian entrepreneur in September last year announced on social media that he was alive, while the South Sudanese leader drove around the capital Juba to prove to the public that he is alive.