Sambisa capture: Shekau's flag and Quran to be presented to Buhari - Army 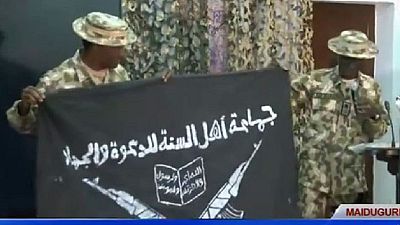 The Nigerian army says leader of insurgent group Boko Haram left the group’s flag and his Quran when their headquarters referred to as ‘‘Camp Zairo’‘ in the Sambisa forest was raided by the army.

The theater commander of the operation that ousted the terrorists, Maj Gen. Lucky Irabor told journalists during a press briefing in Borno State capital, Maiduguri that the flag and Quran will be presented to the top hierarchy of the army for presentation to the president.

‘‘We believe that the Holy Book and the flag were abandoned by Abubakar Shekau while he escaped. The Book will be taken to the Chief of Army Staff, Lt.-Gen. Tukur Buratai for onward presentation to Mr. President,’‘ he said.

We believe that the Holy Book and the flag were abandoned by Abubakar Shekau while he escaped. The Book will be taken to the Chief of Army Staff, Lt.-Gen. Tukur Buratai for onward presentation to Mr. President.

Abubakar Shekau and other leaders of the group fled the forest during a coordinated air and land onslaught by the army on December 22.

President Buhari on Saturday December 24, announced that the Army had successfully dislodged Boko Haram insurgents from the last enclave in the Sambisa forest located in the formerly restive northeast – home to the seven year insurgency.

The army chief has subsequently disclosed that from next year they will begin training exercises in the fallen stronghold of Boko Haram terrorists, the Sambisa Forest. The army says it continues to make arrests of persons believed to be fleeing terrorists and tasked citizens to be wary of people coming to hide in their houses.

“We are also warning residents to report any suspected Boko Haram members hiding in their houses to the relevant security agencies and any failure to do that would tantamount to supporting and sympathising with the sect’s activities,” the theater commander added.

We advise all citizens to be vigilant and report any Suspicious Movement as some Terrorists on the run could easily mingle with them.

Buhari, a 74-year-old former military ruler, was elected in 2015 under the All Progressives Congress (APC) which toppled the Peoples Democratic Party (PDP) which had ruled Africa’s most populous country for the last 16 years.

The APC campaign largely fought on his pledge to crush the Islamist militant group Boko Haram and crack down on corruption and tackle challenges facing the economy. Since his assumption of office a number of former officials have been arrested and arraigned on corruption charges. The opposition has accussed Buhari of witchhunting opponents.

Nigeria’s war against insurgency also received a boost with a more equipped army restricting Boko Haram attacks and taking the fight to the terrorists. The recent success being the capture of the once dreaded and feared Sambisa forest.