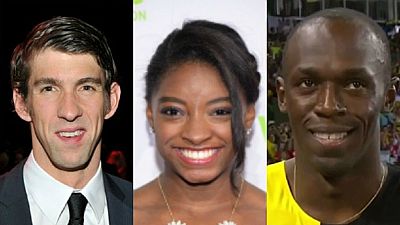 Bolt, track and field’s most recognized figure, added to an already decorated resume at this summer’s Rio Olympics when he became the first man to win the 100m, 200m and 4×100m relay events at three consecutive Games.

Biles was also outstanding in Rio, where she claimed four gold medals and a bronze with several gravity defying performances.

I never get tired of the awards because they reward my work and give it meaning.

The award was the fifth for Bolt following wins in 2008, 2009, 2012 and 2015, but is likely to be among his last as he has stated the intention to retire from the sport next year. The win was the first for Biles as she claims a category typically dominated by her compatriot Serena Williams.

“I never get tired of the awards because they reward my work and give it meaning,“he said.

Almost 400 of our colleagues from 110 countries choose #Bolt and #Biles as Champions of 2016! Congrats! https://t.co/M74FOBFosm

In the women’s voting, gymnast Biles was the winner with 850 points, ahead of the American swimmer Katie Ledecky (827) and Jamaican athlete Elaine Thompson (485).