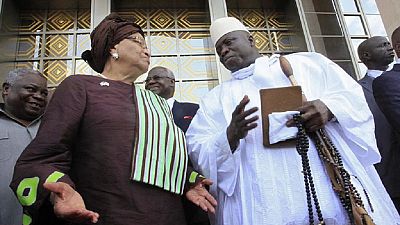 Liberia’s President Ellen Johnson Sirleaf is expected on Tuesday to lead a high level delegation of African heads of state aiming to solve the political impasse in the Gambia, the country’s president-elect Adama Barrow has said.

The Liberian leader’s plane was denied access to Banjul airport on Saturday when she attempted to intervene in Jammeh’s decision to leave power after losing December 1 polls to businessman Adama Barrow.

In an interview with Reuters on Monday, Barrow said he wanted to see an “expedited transitional period” leading to a handover of power from outgoing President Yahya Jammeh. He also said he had no official security and was ’‘exposed’‘.

Meanwhile, a Gambian journalist who was present at a press conference held by Barrow on Monday tweeted the list of African leaders expected in the Gambia on Tuesday.

The African Union (AU) on Saturday described as ‘null and void’ the decision by outgoing president Yahya Jammeh to overturn results of the last presidential polls held on December 1.

The AU in a statement released hours after Jammeh’s declaration of state TV that the elections will have to be rerun after his team cited irregularities said, ‘‘The Chairperson of the Commission reaffirms the imperative for the concerned stakeholders to strictly comply with the rule of law and the respect of the will of their people as clearly expressed during the 1 December presidential elections.’‘

The plane of Sirleaf who is Chairperson of the Economic Community of West African States (ECOWAS) was not allowed to land at the Banjul airport according to the minister.

Reuters reports that even though the reason for the denial was unclear, as was the intended timing of the plane landing, ECOWAS had been hoping to play a role in creating a smooth transition of power in the Gambia.