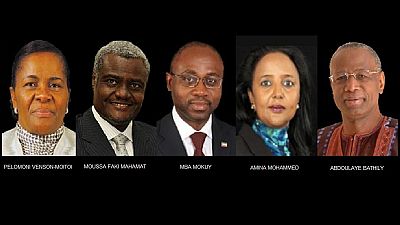 The debate is scheduled for 19:30 EAT (16:30 GMT) at the AU’s headquarters in Addis Ababa, Ethiopia, an AU statement released on Thursday confirmed.

This is the first of its kind in the Union’s history that a debate has been organized ahead of voting for the AUC Chair. Ordinarily, Heads of State vote to choose chairpersons during a summit.

South African Nkosazana Dlamini-Zuma, agreed to stay on till January after leaders failed to elect her successor at a Kigali summit earlier this year. She turned down a second term after serving for a four-year stint.

The event will be streamed LIVE on some news channels, it will also be available online. The AU is asking people to send through questions to the candidates using #MjadalaAfrika hashtag.

The candidates in the running are as follows: