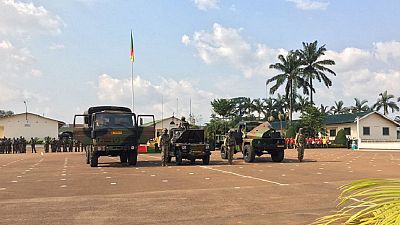 France has made a donation of military hardware to the Cameroonian Armed Forces as part of efforts aimed at combating the Boko Haram insurgent group.

This is the second transfer of material support this year and forms part of the bilateral Franco-Cameroonian military cooperation, reinforced by the signature of a defence partnership agreement on May 21st 2009.

The French Foreign Ministry in a statement noted that the donation included ten French tactical vehicles and five transport trucks, including an all-equipped sanitary unit. It complements the training activities carried out throughout the year by the French military units in Gabon.

These vehicles are equipped with weapons and transmission equipment and are accompanied with precision rifles, helmets and bullet-proof vests. All for a total value of 430 million FCFA, are destined for the Cameroonian army special units.

They were officially handed over on Tuesday November 29th to the Minister Delegate at the Presidency in charge of Defence, Joseph Beti Assomo, by French Ambassador Gilles Thibault.

‘‘These vehicles are equipped with weapons and transmission equipment and are accompanied with precision rifles, helmets and bullet-proof vests. All for a total value of 430 million FCFA, are destined for the Cameroonian army special units.

‘‘This material support is one of the concrete manifestations of the strengthening of France’s solidarity with Cameroon in its fight against Boko Haram as it was announced by the President François Hollande during his visit in Yaoundé on July 3rd 2015,’‘ the statement added.

Over the past year, in addition to the training and equipment of special units, military cooperation between France and Cameroon has particularly increased in the field of mine clearance and information sharing to support the fight against terrorist armed groups.

Cameroon’s Far North region is one of the hardest hit by Boko Haram insurgents. The group continues to carry out suicide attacks on communities in the region. Boko Haram are seen as a sub regional threat within the Lake Chad region.

Beside their escapades in Nigeria’s north, they also carry out attacks on Chad and on Niger hence the establishment of a Joint Multinational Task force to fight them. The group was born in Nigeria’s Borno State with the hope of establishing an Islamic Caliphate in the region.