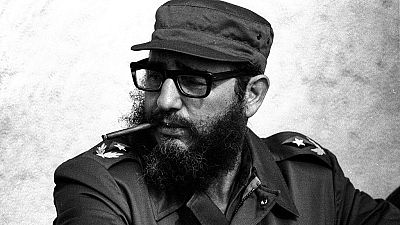 The military exploits of Fidel Castro-led Cuba continues to divide opinions between Ethiopians and Somalis on the day Castro died in Havana, aged 90.

In February 1977, Castro okayed the deployment of 1000s of soldiers under the leadership of one General Arnaldo Ochoa to help Ethiopia in a war against neighboring Somalia. The troops went to support the regime under Mengistu Haile Mariam to annex the Ogaden region.

Haile Mariam, who was the leader of the Communist military junta, was later shown in a famous photo with Castro after Cuban troops successfully defeated the Somali Army.

Many Somalis blame Fidel Castro and the 15,000 Cuban soldiers he sent to reinforce Ethiopian troops during the War for Ogaden in 1977 for being the catalyst that destroyed the hope for "Somali-weyn" or Greater Somalia.

Somalia at the time, albeit allies of Ethioipia believed they were winning the war but forcefully surrendered the Ogaden plateau to the 17,000 Cuban soldiers.

‘‘Many Somalis blame Fidel Castro and the 15,000 Cuban soldiers he sent to reinforce Ethiopian troops during the War for Ogaden in 1977 for being the catalyst that destroyed the hope for “Somali-weyn” or Greater Somalia.

‘‘Siad Barre, confident with Somalia’s military prowess and emboldened by Mengistu Haile Mariam’s struggle to consolidate power launched an invasion into Ethiopian held Ogaden. After a string of initial victories, the Somali national Army (SNA) occupied almost 90% of the Ogaden.

‘‘Ultimately, the Soviet Union was forced to choose between two allies and abandoned Somalia in favour of Ethiopia. The Soviet’s trained 50,000 Ethiopians, sent military hardware and sent between 15,000-17,000 Cuban soldiers,’‘ the Hiraan news portal stated.

In the wake of his death, Somalia and Ethiopians on social media have been expressing mixed reactions on the death.

If it wasn't for Fidel Castro's interference, Ogaden would be in Somalia today.

Fidel Castro dies. He sent 1000s of troops in 1977 & defeated #Somalia Army who was trying to liberate #Ethiopia-occupied region of Ogaden.

So many Somalis have suffered & slaughtered by Ethiopia thanks to Castro's support. Just because US hated him doesn't mean he was great.

#Castro despatched troops to Angola & Ethiopia in support of fellow revolutionaries. His hand was seen in many a revolutionary movements.

Mengistu and Fidel Castro in Havana,Cuba on May 01,1987. (Photo by Francois LOCHON/Gamma-Rapho via Getty Images) pic.twitter.com/IQ8ZehzPBM

A great man and a true friend of Africa passed away. He will always will be remembered as a heroic figure in Ethiopia. Rip…Castro https://t.co/PXorcIgOSx

RIP Castro, a freind of the mother land #Ethiopia

RIP, visionary leader Fidel Castro. However, should he attend his funeral, #Mengistu H/M must be brought to #ICC. Call to action! #Ethiopia pic.twitter.com/luzs5ow8aC

Castro was a true friend of Ethiopia! Wish him to RIP!
Aluta Continua!