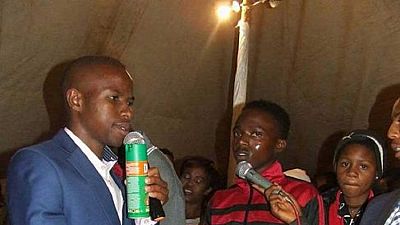 A South African pastor who sprays his congregation with insecticide has been widely condemned. In a facebook post, the pastor Lethebo Rabalago claims insecticide “Doom” can heal patients with cancers and HIV.

The corporate producers of Doom have warned of the dangers of spraying the substance, whereas a authorities urged anybody effected to lodge complaints.

However, the pastor has defended his actions, telling the BBC he is utilizing unconventional strategies to heal patients.

Doom is only an identify, however once you communicate with it to grow to be a therapeutic product, it does.

The nation has seen a wave of practices where church members have been subjected to unorthodox rituals to obtain their healing.

In photos circulating on facebook and on Twitter, Rabalago who manages the Mountzion General Assembly in the Limpopo province, is seen spraying the insecticide directly into the eyes and various body parts of his congregants.

He told the BBC that he had sprayed the face of one woman because she had an eye infection and claimed the woman was “just fine because she believed in the power of God.”

He also claims the spray can heal cancer and HIV.

The pastor claims stricken church members have been delivered after being sprayed with the insecticide.

“Doom is only an identify, however once you communicate with it to grow to be a therapeutic product, it does. Folks get healed and delivered via doom,” church’s Facebook account reads.

Testimonies of people that have supposedly been healed by Doom have additionally been posted on the Facebook web page.

However Tiger Manufacturers, the makes of the product, says it finds the claim “alarming.”