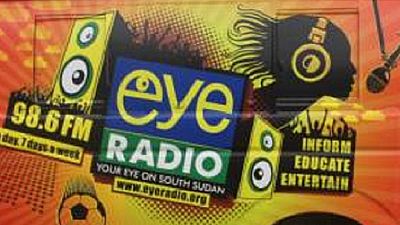 Radio Eye, South Sudan’s first independent radio station, has announced that it will restart operations today after it amicably resolved matters that led to its shut down last Friday by the authorities.

A notice posted on its Twitter handle on November 18 announced their return to the airwaves starting Saturday 19 November, 2016. ‘‘Matters concerning the recent shutdown have been discussed and amicably resolved with authorities,’‘ management of the station noted.

After the shutdown, a notice on the station’s website read, ‘‘This is to inform you our esteemed listener that we’ve unfortunately shut down our broadcast today for reasons beyond our control. We apologize for any inconveniences caused to you.’‘

Reports this week revealed that the shutdown was for airing a 28-second audio clip of opposition leader Riek Machar picked from Doha-based television Al Jazeera.

The management of the nonprofit radio station disclosed through its website that the short news clip was from a press conference held by Machar in October before leaving neighboring Sudan to seek medical treatment in South Africa.

The transcript from the clip read: “We did not see that there is an initiative from the region or the United Nations or the African Union to rescue the agreement. From our side the agreement has collapsed, or part of the government of national unity has collapsed since July events. We do not want violence.”

An editor of the station disclosed that security officials locked their four studios and also switched off the transmitter.

Eye Radio, formerly known as Sudan Radio Service is an independent popular, locally run nonprofit South Sudanese FM Radio and the leading source of news and information in the country. It managed by nationals but funded by USAid and is part of the Internews network.