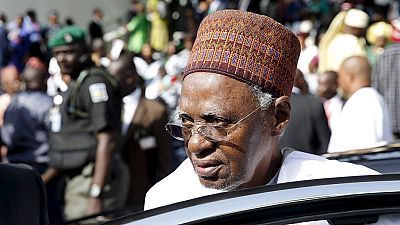 The Government of Nigeria has disclosed that former presidents have not been paid for the last 10 months citing a paucity of funds.

The federal government is supposed by law to pay salaries and allowances to all former presidents in the country, but Vanguard online portal cites an anonymous source saying President Buhari had failed to give approval to payments.

According to the Secretary to the Government of the Federation, Babachir Lawal, who was speaking to some lawmakers, “There is a department responsible for payment of former presidents. At present, funds are not available in service wide votes to do that.

We can understand if former President Goodluck Jonathan has not being paid because he just left office. But for someone like Shagari, who lives from hand to mouth is something I can’t understand. This development is really unfortunate.

‘’We are aware there was a protest in Bayelsa State that the former President (Goodluck Jonathan) was not paid, but we’ve explained that he’s not the only one affected.

“Others affected are inter-religious council, traditional rulers council and so on. For some reasons, we have been writing and writing, but there has been no response. And there is currently no money to pay them,” he added.

Former leaders of Africa’s most populous nation include:

But reacting to the development, lawmakers who visited the government secretary protested the non-payment and insisted that joint efforts be made between the office of the SGF and the legislative committee towards finding a solution to the problem they described as unfortunate.

One of them, Senator Suleiman Hunkuyi, who described the situation as abnormal, is quoted to have said: “What we have seen here is an abnormality. Before referring any matter to the National Assembly, it is a function of the executive to appropriate funds.

“Therefore, the SGF should understand that there is something wrong in this office that must be addressed. There is no way you can run the expenses of this office without cash backing.”

Another decried the situation especially for the 91-year-old Shagari who he described as ‘living from hand to mouth. “We can understand if former President Goodluck Jonathan has not being paid because he just left office.