The Russian Defence Ministry has accused rebel forces in eastern Aleppo of using chemical weapons in an attack on the Syrian army four days before an international inquiry’s mandate for apportioning blame for their use ends.

Russia’s TASS news agency says around 30 soldiers were caught in the attack, which took place on Sunday evening. Most have been hospitalized in Aleppo.

Local media said former al-Qaeda faction Fatah Halab was responsible, adding it was the third such attack by the group in a month.

Russia’s foreign ministry said on Friday it wants the Organisation for the Prohibition of Chemical Weapons to urgently send a mission to the city.

It said it had evidence of a separate attack by Syrian rebels using chemical weapons.

An international inquiry has been underway for the past year on the use of chemical weapons in the conflict, and has so far confirmed three chlorine gas attacks by Syrian government forces, and a mustard gas attack by ISIL.

The inquiry’s mandate, extended at the end of October, ends on Friday November 18. 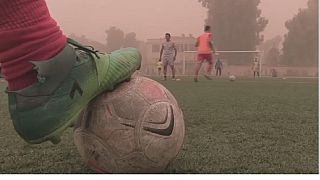