Trump is 'the white Malcolm X' – Obama's half brother celebrates 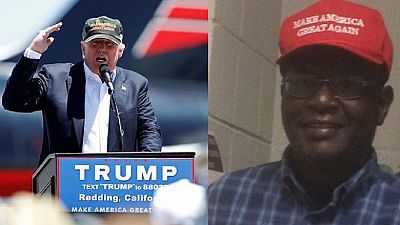 Malik, who had actively campaigned for Mr Trump used social media platform, Twitter, to send his message across. ‘‘CONGRATULATIONS PRESIDENT TRUMP! GOD IS GOOD!’‘ one of his tweets read.

He announced in July that he will be voting for Trump instead of his President Obama’s preferred candidate, Hillary Clinton. Trump later invited him to one of the presidential debates ahead of the polls.

My two children died while my brother was President; not even simple condolence. Humiliated and demeaned.

Malcolm X born Malcolm Little was a courageous advocate for the rights of blacks, he spoke about white America in the harshest terms for what he said were crimes against black Americans; detractors accused him of preaching racism and violence. He has been called one of the greatest and most influential African Americans in history.

‘‘My two children died while my brother was President; not even simple condolence. Humiliated and demeaned,’‘ an apparent accusation of how Barack Obama had neglected members of his family.

Malik and Barack are connected through the same father, Barack Obama Sr. Born in March 1958, he was born to Obama Sr and his first wife Kezia. He was raised in the Kenyan capital, Nairobi.