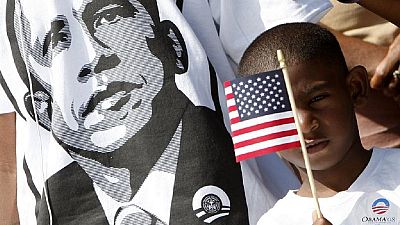 Barack Hussein Obama, the 44th president of the United States of America, takes a ‘bow’ from arguably the highest political office in the world. As the first African American to achieve this feat, we look back at his interaction with the continent over the last eight years.

Obama’s victory at the polls 8 years ago was celebrated across the African continent. From his native Kenya through to Egypt and The Gambia, his entry to the White house was seen as a new beginning for the continent’s relations with the US.

In a series of articles, Africanews will delve into Obama’s relations with the continent in his capacity as President of the United States (POTUS). We would also use pictorial representation in some parts of this presentation.

'If there is anyone out there who still doubts that America is a place where all things are possible, who still wonders if the dream of our founders is alive in our time, who still questions the power of our democracy, tonight is your answer.

With the historic electoral victory of Republican candidate Donald John Trump, Obama will hand over to another history maker. According to the BBC, Trump is the first US president to never have held public office or served in military.

Basically we review who the man Barack Hussein Obama was before assuming the office of the presidency, what he stood for as president and ‘where next’ after the White House.

Obama – the academician and politician before 2008

Born on August 4, 1961, Obama is the first US president to be born off mainland United States. He was born in Honolulu, Hawaii. He was born to Barack Obama Sr (Kenyan government economist) and Mrs. Stanley Ann Dunham (a US anthropologist).

He is a graduate of the Columbia University and Harvard Law School, where he was president of the Harvard Law Review. He is on record to have worked as a civil rights attorney and also taught constitutional law at the University of Chicago Law School.

He switched from academia to politics, serving three consecutive terms representing the 13th District of Illinois Senate between 1997 – 2004. In between that time, he lost an election to the US House of Representatives in 2000.

Obama received national attention during his campaign to represent Illinois in the Senate. Before then however, he was simply the husband of one Michelle Obama and father to Malia and Sasha Obama. From the outset, Obama showed the intent that there was no stopping his charge towards history.

In his election victory speech of November 8, 2008, Obama said, ‘‘If there is anyone out there who still doubts that America is a place where all things are possible, who still wonders if the dream of our founders is alive in our time, who still questions the power of our democracy, tonight is your answer.”

He took over from George Walker Bush, a Republican who had also served two terms (2000 – 2008) in office who took over from Bill Clinton, another two-term Democrat (served as president between 1992 – 2000).

A Ghanaian university professor, Etse Sikanku, author of the book, ‘The Afrocentric Obama and Lessons on successful political campaigning’ wrote, “Obama stands for certain things—communalism, compromise, civility and cooperation. These are things we need in our political and governance systems in Africa. His legacy stands for something more enduring beyond dollars or financial aid.

“The message is that African leaders must inspire, work for the good of the people, not personal selfish interests and look within the continent rather than depend on external sources for development, the message is for leaders to have people at the center of policy making,” he added.

In the second part of our Obama & Africa series, we dissect Obama’s African trips. Those he undertook in his first and second terms as president. Join us then.