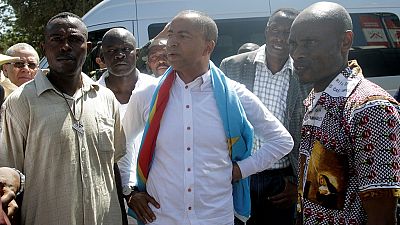 Two radio journalists from Kolwezi in southeast of the Democratic Republic of Congo were arrested on Monday after airing an interview with exiled opposition leader Moise Katumbi.

The director general of Manika Radio-Television in Kolwezi, Gaston Mushid and the director of programmes, Carton Kasong were arrested at 08:00 GMT, according to NGO Press and Journalists in Danger (JED).

According to JED, the Katumbi interview was broadcast on Sunday on Manika Radio a few hours before the broadcast of the final of the CAF Confederation Cup won by TP Mazembe against Algerian club Mouloudia Bejaia in Lubumbashi.

JED condemned their arrest which they described as “a serious attack on press freedom.”

The provincial media minister in the Lualaba province, Joseph Emmanuel Ikos said he was “not aware of the arrest.”

Moise Katumbi is the owner of TP Mazembe and was the governor of Katanga province until he left the ruling party in September 2015 to form his own party to stand for president.

The former ally of President Joseph Kabila has been out of the country since May for medical treatment yet in June 2016, he was convicted and sentenced to 36 months in prison for selling a house that was not his.