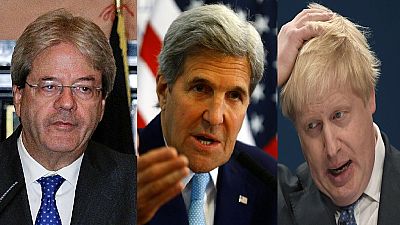 Foreign Ministers of the United States, the United Kingdom and Italy have met with Libyan Prime Minister Fayes Seraj on how best to tackle the north African country’s slide towards political and economic collapse.

The three top diplomats are concerned about a political standoff in Libya that is preventing Tripoli’s United Nations-brokered unity government from expanding its authority outside the capital.

Working with partners today to help support a stable, strong Government of National Accord for #Libya's people. pic.twitter.com/3E0KrvRTO5

Western powers are alarmed about resistance to Seraj and his Government of National Accord (GNA) from the country’s eastern military commander General Khalifa Haftar, who has blocked a parliamentary vote to endorse the GNA.

Aside a recent onslaught by rebels to take over the headquarters of the GNA, the parliament based in the east has twice rejected lists of ministers put forward by the GNA leadership meant to represent the various sides in Libya’s fractured politics.

Libya’s inability to appoint a finance minister has stalled economic decision-making in the major oil-producing country, an OPEC member.

Since the fall of Muammar Gaddafi to an uprising in 2011, Libya has been beset by factional fighting among brigades of ex-rebels. There are rival governments holding authority over different parts of the restive country.

Two side-effects of Libya’s protracted disorder are of major concern abroad – an uncontrolled flow towards Europe of migrants setting off in boats from Libya’s lawless shores where people smugglers operate, and an infiltration of Islamic State militants now holding patches of the country’s territory.