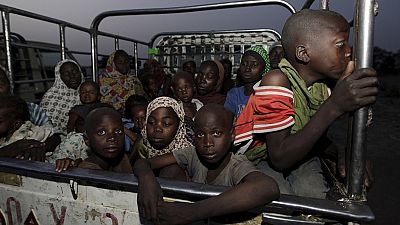 The United Nations Children Emergency Fund (UNICEF) has secured the release of 876 children held by Nigeria’s army and security forces. The children have been held by the security agencies since they recaptured land from Boko Haram militants.

Head of UNICEF in the west and central Africa region, Manuel Fontaine, told the media that the children had been held in the barracks in the Borno State capital, Maiduguri in the country’s volatile north-east.

“We fear that there are still kids who are being at least temporarily detained because they are being released from Boko Haram areas by the army but then kept for a while,” Fontaine told journalists by telephone.

He did not give any further details on the children or how long they had been held. He added that even after their release there was the issue of rehabilitation that needed to be worked on.

“Once we get children out, there is a major issue of stigmatization in the communities,” Fontaine said. “There is a sense that children who have been associated with Boko Haram for a while, could be, and in some cases we have some evidence, are rejected by community and people around them.”

The army as part of its comabt against the insurgents routinely detains civilians who have been living in former Boko Haram areas on suspicion that they too might be linked to militant activities.

The army has in the recent past, handed over scores of persons formerlly allied to the insurgents to the Borno State government after ‘clearing them.’ They have continued their counter insurgency against the sect who they say have been largely degraded and restricted to bombing soft targets.

Rights groups have complained there is no proper legal process in the army’s detention mode since most detained persons do not get formally charged. Some end up rehabilitation centres, which the groups say are like prisons.