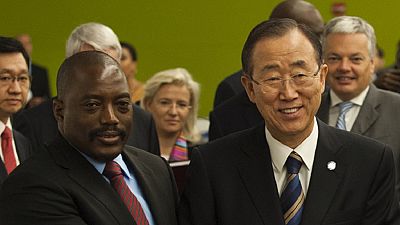 <p>The United Nations Secretary General, Ban Ki-moon has commended Edem Kodjo, the African Union (AU) facilitator of the national dialogue in the Democratic Republic of Congo (<span class="caps">DRC</span>).</p> <p>A statement attributable to his office said, ‘‘the Secretary-General takes note of the conclusion of the national dialogue in the Democratic Republic of the Congo (<span class="caps">DRC</span>). </p> <p>‘‘He commends Edem Kodjo, the African Union Facilitator for the dialogue, as well as participants to the talks for their work and commitment towards a peaceful solution to the crisis in the context of the electoral process.’‘<br />  <br /> Ki-moon expressed the hope that the implementation of the agreement will contribute to a more conducive climate for the respect of fundamental rights and freedoms essential to political debate and credible elections.</p> <p>Whiles calling on the government to remain actively engaged with all political stakeholders, he also called for ‘‘further release of political prisoners and respect for the right to peaceful assembly and freedom of expression. </p> <p>‘‘He also calls on political groups who were not part of the national dialogue to seek to resolve their differences peacefully,’‘ the statement added.</p> <p>The said agreement validated during a plenary meeting in Kinshasa allows incumbent Joseph Kabila to stay in power till elections are held in April 2018. This is despite his second and final term expiring later this year.</p> <p>Even though the facilitator referred to it as an ‘inclusive national dialogue,’ the opposition group led by Etienne Tshisekedi described it as a ‘working document.’ </p> <p>The opposition faction known as the Rally and led by the <span class="caps">UDPS</span>, has said it will not back down on piling pressure on President Kabila to abide by the constitution when his tenure expires in December.</p> <p>The deal was signed earlier before the the Constitutional on Monday also gave the electoral body official permission to delay the elections. The court asked the body to produce a timetable on how and when it could realistically hold polls.</p> <p>Protests last month against the delaying of the presidential election resulted in at least 50 deaths. The opposition has hinted that they will hold another protest if an electoral timetable was not announced soon.</p>