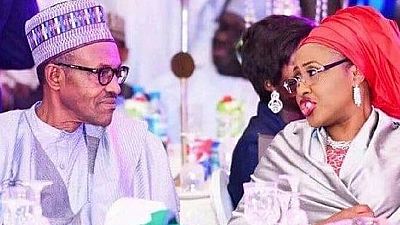 “I don’t know which party my wife belongs to, but she belongs to my kitchen and my living room and the other room,” Nigerian President Muhammadu Buhari told reporters in Germany who asked him about his wife’s comment suggesting he doesn’t know most of his government officials.

Aisha Buhari granted an interview to the BBC in Hausa last Friday where she claimed that the government is being ruined by “a few people” and the president doesnt know about 50 of his appointees.

I don't know which party my wife belongs to, but she belongs to my kitchen and my living room and the other room.

“Out of the people he has appointed, take 50, 45 of them I don’t know them. Perhaps he doesn’t know them too. I have been living with him for 27 years,” she said.

“Some people that are not politicians, not professionals were brought into the government. They don’t even know what we said we want and what we don’t want during the campaign,” she answered to a question regarding the shortcomings of the government.

If Things Continue Like This, I Won't Back Buhari In 2019 – Aisha Buhari on BBC. To read full article: https://t.co/fIBfHwEpkg pic.twitter.com/pwqMPoqRcK

Aisha further added that she doesn’t know if Buhari will stand again for the presidency in 2019 but “if things continue like this … I will not go out and campaign again and ask any woman to vote like I did before. I will never do it again.”

President Buhari laughed it off before the German Chancellor Angela Merkel when he was questioned and said he hopes his wife will remember he has run for presidency three times already.

“So I claim superior knowledge over her and the rest of the opposition, because in the end I have succeeded. It’s not easy to satisfy the whole Nigerian opposition parties or to participate in the government,” he added.

This statement from the president sparked a lot of criticisms forcing his spokesperson Garba Shehu to defend him saying the statement was spiced with humour.

“My friends, can’t a leader get a sense humour anymore? Mr. President laughed before that statement was made … Mr. President respects the place of women in our society. He believes in the abilities of women,” he explained.

One of Nigeria's most sensitive office today is headed by a woman, Mrs. Adeosun. This is an evidence of the confidence he reposes on women.

Shehu added that the president was throwing a banter and that politics should be spiced with humour.

Politics sometimes should be spiced with humour. Those of us close to him knows there is never a dull moment with him.

Nigeria is facing economic hardships caused by among others, a slump in oil prices which has placed a lot of pressure on the government.

Aisha Buhari advised during the interview last week that those who are not qualified in government positions should give up the posts for the politicians.

“Some of them if you go to a meeting with them they will tell you, we are not politicians, if that somebody is wise, they will not accept to take any political office. They didn’t even work for it. Even if you are asked to, you should say it is not my profession. Those places not headed by politicians will cause people discontent,” she said.