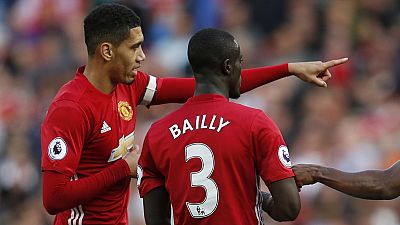 Eric Bailly, the Ivorian international who plays for Manchester United has started taking English lessons as United manager, Jose Mourinho seeks to improve communication in the team’s defense set up.

Bailly who largely speaks French and Spanish confirmed to ESPN that Spanish and French colleagues have been helping him to integrate but he had started English classes.

‘The people have been very friendly with me, the players too. There are players who speak Spanish and French and they help me integrate. I’ve just started having English classes, too. Little by little.

There are players who speak Spanish and French and they help me integrate. I've just started having English classes, too. Little by little.

‘It’s important for the other players to have confidence in you. It was my dream since being a child to play for one of the biggest clubs in the world and now I’m here, I’m going to take that chance,’‘ he added.

Bailly was Mourinho’s first and only African signing till date, he joined the old Trafford outfit from Villareal in the Spanish league. He cost United £30m for a four-year contract. He is also the first Ivorian to don the United shirt.

He has made a strong start to his premier league career, he has started all but one game for Mourinho, an away victory at Northampton. His partnership with Chris Smalling is also developing.