The release of Morsi will restore Egypt-Turkey ties - Erdogan stipulates 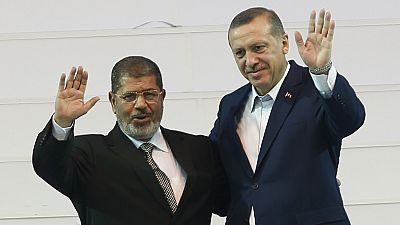 Turkish president Recep Tayyip Erdogan has set out conditions including the release of former Egyptian president Mohamed Morsi before his country will normalise ties with Egypt.

He also criticized the 2013 coup in Egypt describing it as unacceptable for an elected president to be imprisoned and sentenced together with his supporters to death.

“The current Egyptian government came as a result of a military coup which happened against legitimacy in Egypt … The situation in Egypt should be rectified and democracy should be open to everyone,” he said during an interview with a Saudi Arabian television and quoted by the portal Middle East Monitor.

Erdogan also called for the release of former President Morsi’s supporters which is inclusive of the conditions before normalising bilateral relations.

He recalled the strong bonds between the two countries in the past while stating that the circumstances surrounding the coup in Egypt was different from that of Turkey because President Abdel Fattah Al-Sisi who was the defence minister under Morsi took over after the coup.

Mohamed Morsi was sentenced to death in June 2015, with a hundred co-defendants for mass escape from prison and attacks against the police during the 2011 uprising that ousted Hosni Mubarak from power.

Before this sentence, he has already been convicted in four trials including life imprisonment for espionage.

Turkey itself suffered a failed coup in July causing the arrest of thousands of security officials. Erdogan has accused a U.S.-based Turkish cleric Fethullah Gulen of being behind the coup, but, Gulen denies the accusation.