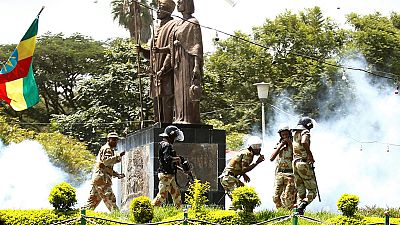 The African Union (AU) has stated that it welcomes the decision by the Ethiopian government to investigate the cause of a stampede that killed 52 people during a festival over the weekend.

‘‘The AU Commission Chairperson welcomes the government’s efforts to investigate the cause of the stampede and to bring to justice those responsible, while calling for calm and peace,’‘ an AU statement released on Monday read.

The statement added that Dr Nkosazana Dlamini Zuma welcomed the three-days of mourning declared by the government whiles reiterating the AU’s solidarity with the victims and people of Ethiopia during what they described as ‘trying times.’

We are profoundly saddened by the #Irrecha Festival tragedy. We mourn with our #Ethiopia Brothers & Sisters for the precious lives lost. pic.twitter.com/0YS0sbKYB6

The deadly stampede occured on Sunday, October 2 at the annual Irrecha festival of thanksgiving in Bishoftu town in the Oromia region – a region known for its protests which have often been clamped down upon by security forces.

The government blamed elements they called ‘anti-peace forces’ for the deadly stampede. “As a result of the chaos, lives were lost and several of the injured were taken to hospital … Those responsible will face justice,” the government communications office stated.

Local media reported that security forces fired tear gas at participants. The shooting and subsequent stampede occured immediately after ruling party officials were booed off when they wanted to address the crowds at the festival.

Witnesses told Africanews that the helicopter dropped teargas on the people while the police on the ground fired the shots.

The chairperson of the opposition Oromo Federalist Congress, Merera Gudina, told Reuters that at least 50 people were killed during the stampede while Jawar Mohammed who is the Executive Director of the Oromia Media Network based in the United States reported about 300 dead.

Among the thousands of festival participants, a number of them marched chanting anti-government slogans and their arms crossed above their heads while Ethiopian Air Force helicopters hovered above the crowd.