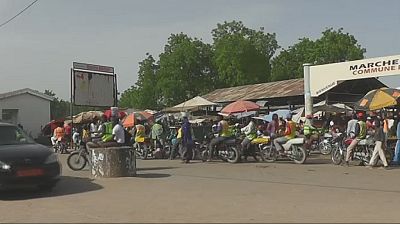 It’s a market day in Cameroon’s bustling trade hub,the northern city of Maroua, the city had long ago gone quiet.

For years, the capital of Cameroon’s Far North region was sustained by cross border trade of onions, rice, maize, livestock and other agricultural goods with neighbouring Nigeria.

But the region’s economy was hit by an Islamist insurgency led by Boko Haram , the militant group that has wreaked havoc in northeast Nigeria.

The market is no longer what it used to be. We are unable to sell our produce; our produce is just here rotting, nothing gets sold.

Although market activities have resumed in Maroua, people say they are struggling to make a living adding that they live in fear.

“The market is no longer what it used to be. We are unable to sell our produce; our produce is just here rotting, nothing gets sold,” said one vendor Anna Mita.

A Business man in the area Ahmadou Badika said People no longer come to Maroua like they used to.

“All of this is because of Boko Haram and their attacks, which have blocked trade and transport, so now people are scared to come to the market because of fear of the attacks,” he added.

The Cameroonian army is using Maroua as a base in the fight against Boko Haram. Security is high, and patrols are frequent. Many hope that this will help restore confidence in the region’s economy.

Boko Haram militants have killed thousands in their bloody campaign to carve out an Islamic caliphate in northern Nigeria.

The Islamist group has pledged allegiance to the leader of the Islamic State militant group that controls tracts of Syria and Iraq.