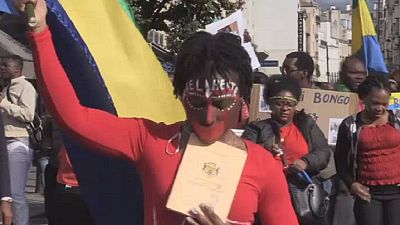 Many miles away from where the drama is unfolding. Opponents of the Gabonese President Ali Bongo on Saturday gathered in Paris,France, in solidarity of Gabonese citizens disputing the August 27 election results, saying Jean Ping is the rightful owner of the presidential seat.

“For 50 years, Bongo has been in power. and ignoring the popular will. Gabonese do not intend to let them tis time. They will fight till the end to get their victory, “ he said

One of Ali Bongo’s supporters attending the protests spoke of a more strategic way of ironing out issues of the country.

“There is no place in Gabon to reject of hate another person. There should be instead- in Gabon- dialogue, especially to address the issue of how we can live better together, better our institutions, review polices and then be open the world because anyway, we have no choice . “

This is the second wave of protests by Gabon nationals living in France calling for Bongo to step down.