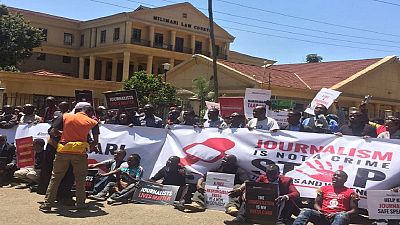 Hundreds of journalists in Kenya have staged a demonstration on Thursday calling for protection against attacks after recent assault on reporters while on duty.

The demonstration took place concurrently in counties nationwide and journalists in the capital Nairobi presented petitions to parliament, the police chief and director of public prosecutions.

“Attacks on journalists are uncalled for and must be stopped. Action must be taken to send a message that no one will attack a journalist and get away with it,” one of the organizers David Owino told Kenyan local media The Star.

He added that they want the security forces and judiciary to follow up on their petitions to bring to book those who meted out violence on journalists.

#JournalistsUnderSiege We must stand together with Kenyan journalists to stop&end violence,harassment and unfair treatment against them

Among the victims of attacks sparking the demonstration includes journalist Joseph Masha who died last week of suspected poisoning after a meeting with a politician. The Kenyan journalists union has called for an investigation into his death.

A freelance photographer Dennis Otieno was killed on Wednesday night by three assailants at his home in Kitale,Trans Nzoia county. His wife said the attackers demanded for a certain photograph he had taken before they shot him, The Star reported.

About half a dozen other journalists were beaten by the security of politicians for taking pictures while others were stopped from performing their duties.

Last year, Kenyan journalist and newspaper editor John Kituyi was shot dead at his home by unknown assailants. Investigations are still ongoing and no one has been prosecuted.