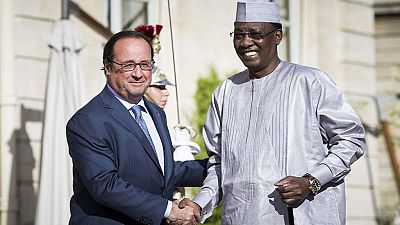 A few days after his inauguration, Chadian president Idriss Deby Itno has met with French president Francois Hollande at the Elysee Palace on Saturday.

On the top of the agenda is the fight against Boko Haram and the Lake Chad region’s security, the French presidency said in a statement.”

“The two leaders discussed the fight against Boko Haram and current operations by the Joint Multinational Force, which includes the neighboring states of Lake Chad,” the Elysee said.

Francois Hollande confirmed the support of France to the African force, whether logistical support, supply of information, donation of equipment and training.

“Francois Hollande confirmed the support of France to the African force, whether logistical support, supply of information, donation of equipment and training,” of which it said the two presidents agreed to work closely.

The French head of state also confirmed that France would boost its solidarity with the people living in the region, through the initiative for Lake Chad carried by the French Development Agency.

“This project will be implemented by NGOs to strive to preserve the lake, pursuant to commitments made at the COP21,” the Elysee said.

Boko Haram’s insurgency in the Lake Chad region has caused the death of more than 20,000 people with another 2.6 million displaced.

The joint multinational force established in 2015 with 8,500 men from Nigeria, Niger, Chad, Benin and Cameroon is slowly making gains against the Islamist group.