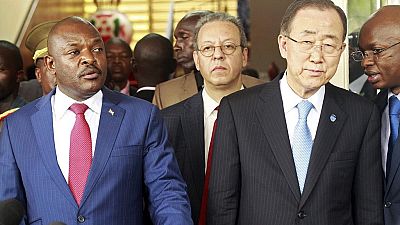 The government of Burundi has officially rejected a United Nations Security Council (UNSC) resolution to deploy police officers to the country.

The UNSC late last month via resolution 2303 agreed to send over 220 UN police to monitor the security and human rights situation in the east African country.

The government used their official twitter handle to announce their opposition to the position of the Security Council. ‘‘Burundi: The Government rejects the provision of resolution 2303 in connection with the sending of a force on its territory,’‘ the tweet read.

President Nkurunziza’s decision in April 2015 to seek a third term in office led to political unrest. He went on to win elections in July 2015 and was subsequently sworn in as president.

Rebel groups have been trying to make the country ungovernable with tit-for-tat assassinations and running grenade and gun battles that have killed more than 450 people and forced over 250,000 to flee the country.

The latest assassination was of a former minister who is considered a close ally of Nkurunziza. Hafsa Mossi was murdered in the capital Bujumbura. The action led to widespread condemnation by the government and international bodies.