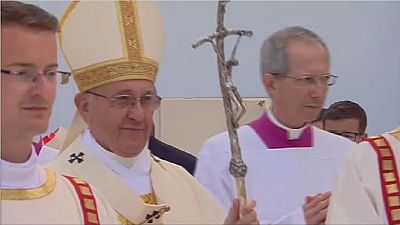 Pope Francis brought the Catholic Church’s World Youth Day in Poland to a close on Sunday.

And as he celebrated an open-air mass in front of up to 2.5 million pilgrims gathered in a field outside Krakow, he sprinkled his sermon with social media and technology terms.

Francis urged young people to “‘download’ the best ‘link’ of all, that of a heart which sees and transmits goodness without growing weary”.

Don’t be discouraged: With a smile and open arms, you proclaim hope.

He said their response to life’s challenges can’t be “texting a few words,” and that prayer should be given pride of place over internet “chats”.

“People may judge you to be dreamers,” he said at what was the final mass of his trip to Poland, “because you believe in a new humanity, one that rejects hatred between people….

“Don’t be discouraged: With a smile and open arms, you proclaim hope.”

Pope Francis, 79, who has said he is a “disaster” with technology, has connected with young people throughout his five-day visit, including the very young.

Francis announced that the next World Youth Day in 2019 would be in Panama.

The revelation prompted rejoicing from pilgrims who had travelled from that country as well as its president, Juan Carlos Varela, who had also made the journey and was seen celebrating next to his Polish counterpart, Andrzej Duda.

Panama pilgrims are incredibly excited for #Panama2019! See you there!! #ThanksWYD pic.twitter.com/WTj5Q5yv7O

They were not the only ones enjoying themselves, as a carnival atmosphere marked the end of the event, with music and dancing that even saw nuns and clerics joining in. 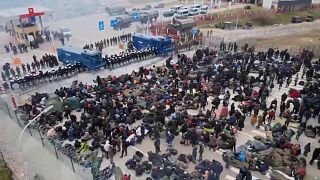 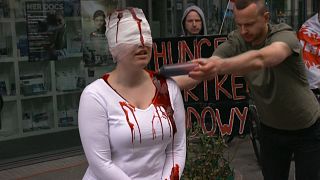