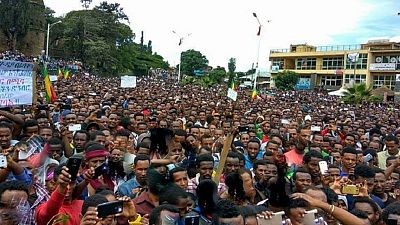 Tens of thousands of protesters have flooded the streets of Gonder in the Amhara region of northern Ethiopia on Sunday demanding a change of government due to the unfair distribution of wealth in the country.

The protest, reported to have been staged in defiance of a government order, is also in solidarity with the Oromia protests held between November last year to March 2016 in opposition to a government development plan in the region which could affect poor farmers.

Images posted by protesters and other eye witnesses on social media show hundreds of thousands of people carrying Ethiopian flags and placards singing and chanting against the government’s regime.

Salute of solidarity from the #AmharaProtests to the #OromoProtests

Some videos show the protest to be peaceful and so far no violence has been reported.

The regime in #Ethiopia has pressure in the north of the region#AmharaProtests #GonderProtests has struck a nerve pic.twitter.com/x7sIkwIdPK

Steered by the hashtags #AmharaProtests and #GonderProtests, the protesters bemoan the unfair distribution of wealth in the country and denounced the Ethiopian People’s Revolutionary Democratic Front (EPRDF) led government affiliated to the Tigrayan People’s Liberation Front (TPLF) militant party.

#AmharaProtests #GonderProtests Huge protest against regime in #Ethiopia in Gonder

The EPRDF has come under heavy criticism for its handling of the Oromia protests and also its intolerance towards the media and civil society.

Thousands of students, social media activists, and opposition party leaders and supporters were arrested and dozens were charged under the country’s Anti-Terrorism Proclamation (ATP) while hundreds remained in custody without charges.

Human Rights Watch released a report in June estimating that over 400 Oromo protesters were killed in November 2015, and thousands others arrested by Ethiopian security forces during the protests.

The government however disputed the figures and earlier in March, the Prime Minister Hailemariam Desalegn blamed the death and destruction on “violent” protesters. He however apologized before parliament for “not listening to the concerns of the people”.

The Oromia and Amhara are two of the nine ethnically based regional states of Ethiopia which are considered the poorest compared to the others.

The protest is expected to build up in the coming days.

To Ethiopia: We diasporas may not be w/U in flesh. But we R w/U in spirit, in congruence & support 2 constitute UR freedoms #AmharaProtests

#Ethiopia: pics of Gonder today, streets are packed with people demanding the downfall of the regime #AmharaProtests pic.twitter.com/TpQFzqs6KJ