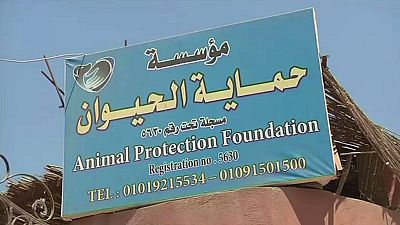 Two shelters in Egypt are hoping to provide a safe haven for mistreated, stray and injured animals.

At a shelter in Giza on the outskirts of Cairo, owner Hanan Deebes looks after stray dogs.

She started the shelter after witnessing animal cruelty and neglect in Cairo.

Now, shelter workers collect strays they pick up from the streets or respond to sightings of injured dogs that are reported through their Facebook page.

They also rescue abandoned or unwanted pets, whose owners no longer care for them.

“We have two ways of getting dogs. Either they are strays on the street, reported by someone on Facebook or we find them by chance. They have been hit by a car, attacked with a knife, had acid thrown on them, fallen from a balcony, they tell us and we go and get the dog. Or these dogs were bought by people and after some time the owner got bored of looking after them, they grew up. They have already played with them when they were young and that is it. We find them tied to a bridge or a streetlight. This actually happened, we found expensive dogs tied on the streets or left scared and running and not knowing where to go so we take them in,” Deebes said.

The shelter looks after more than 300 dogs and relies on donations to treat sick and injured animals, who are taken to local private vets or looked after by the shelter’s veterinary nurse.

Deebes calls for new laws and policies to be introduced in Egypt to help protect vulnerable animals.

“We don’t understand why there is not a law that would govern the human-animal relationship and prevent people from harming them in this horrible way,” she said.

At another animal shelter ‘Egypt Equine Aid’, owner Jill Barton looks after sick and injured horses and donkeys, who are treated at the shelter’s own hospital.

Barton first came to Cairo from Australia as a volunteer and, after witnessing the mistreatment of animals, decided to start her own horse shelter and hospital in Giza.

“We first came here in 2014 to volunteer to help another charity and when we saw the plight of the animals here it really affected us and we just felt that we can’t just go home to an easy life, we had to come back to do something to help,” she said.

Barton provides all medical services for free and hopes to help horse owners who cannot afford to treat sick or injured animals, especially those who rely on their livestock to make a living.

“We provide free care for the under-privileged people. Because these animals are their livelihood a lot of the time, it might be their only means of transport, their only means of getting their projects to the market. So we provide it free because we know things are tough here,” she said.

Egypt Equine Aid also relies on donations as well as Barton’s own income.

Barton sold her house to raise funds to set up the shelter and receives international donations, mainly from Britain and Australia.

“We are picking up more donors from Australia now. We’ve had a fantastic grant from the Australian embassy here in Cairo and we have just purchased an x-ray machine and they have been a great support,” she said.

She also receives donations from local schools, whose students are keen to help care for the animals.

Barton hopes that in the future veterinary students can use her hospital and shelter to train and learn vital skills in animal care.