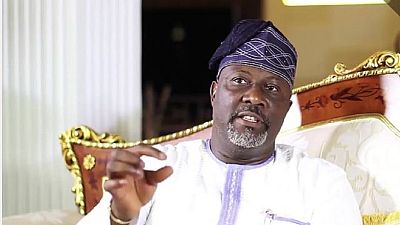 A group of women on Monday marched through the streets of Nigeria’s commercial capital, Lagos, to protest an attempted physical assault on a female Senator by her colleague in the law making house.

The protests were directed at a ‘maverick’ lawmaker, Dino Melaye, who was reported to have verbally assaulted a colleague, Oluremi Tinubu, wife of a former Lagos State governor and ruling party chief, during a plenary session of the Senate last week.

The women carried placards which carried messages like ‘Say NO to Abuse, Say NO to Dino Melaye,’‘ as they marched through the streets.

I have decided not to ignore his threat to my life. Therefore, I am compelled to urge you to use your good offices to provide me with adequate security.

Meanwhile, Senator Oluremi Tinubu has officially requested for police protection following last week’s threat. In a letter to the Acting Inspector General of Police, Remi Tinubu said, ‘‘… Senator Dino Melaye threw caution to the winds, resorted to vulgar abuse of my person and wanted to assault me.’‘

She continued to say that were it for the intervention of other Senators she would have been victim of a physical assault. She added that because the leadership of the Senate did not call him to order in the circumstance, he proceeded to threaten her life without any provocation whatsoever.

‘‘I have decided not to ignore his threat to my life. Therefore, I am compelled to urge you to use your good offices to provide me with adequate security,’‘ she concluded.

Meanwhile, her husband who is a leading member of the ruling All Progressives Congress (APC) over the weekend issued a statement which read that, “Dino Melaye sank to the lowest ever on Tuesday. From this point, it is downhill for him. A disgrace to the Senate of the Federal Republic of Nigeria

“If Dino thinks nothing will happen if he dares to beat up another senator, then he must be living in a fool’s paradise. Things will happen,”  Tinubu’s spokesman wrote on Twitter.

Melaye’s action has received widespread condemnation from several quarters in the society and more protests have been scheduled against his comments and actions.