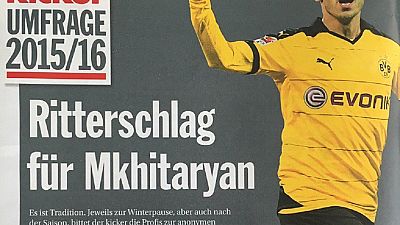 English club Manchester United have announced signing Armenian Henrikh Mkhitaryan from Borussia Dortmund. Henrikh joins the red half of Manchester on a £26 million four-year contract with the option to extend for a further year.

Mkhitaryan, 27, has scored 41 goals in 140 appearances and for Borussia Dortmund, since joining the Bundesliga side in 2013. Last season he scored 23 goals and registered an impressive 32 assists across all competitions. Henrikh was voted Bundesliga Player of the Season for 2015/16 in a poll of his fellow professionals, and he was named in the Team of the Season following votes by the players’ union in Germany, VDV.

The midfielder is also Armenia’s all-time top scorer, with 19 goals in 59 appearances since his international debut in January 2007. Henrikh captains his national team and has received the Armenian Footballer of the Year award on five occasions.