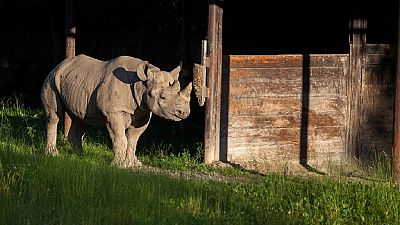 A three year-old Eastern black rhino, Eliska, has successfully been transported from its birthplace in the Czech Republic to a natural habitat in a Tanzanian sanctuary as part of conservation project by the George Adamson Wildlife Preservation Trust.

The Trust, committed to helping endangered animal populations grow in their natural habitats teamed up with global transport experts, DHL, to achieve the successful transfer of the 900kg mammal.

According to Tony Fitzjohn OBE, Field Director, of the George Adamson Wildlife Preservation Trust, “Having the support of an experienced team of international transport specialists allowed us to focus without any distraction on the comfort and well-being of Eliska and to ensure that she had the best possible introduction to her new life in Africa.”

As facilitators of global trade, it’s fantastic that we can use our logistics expertise for such an important conservation project, and we trust that Eliska will flourish in her new home in Africa.

“We were delighted that DHL was able to support us with this project, as we were only prepared to entrust Eliska to partners who could absolutely guarantee a safe and seamless move,” he added.

The journey of Eliska to Africa started from her birthplace in the Czech ZOO Dvur Kralove, she was sent to DHL’s main European Hub in Germany, before she was loaded on to a dedicated 28-ton Boeing 757-200 freighter, specially modified for animal transport.

She was subsequently flown over 6,500 kilometers directly to Kilimanjaro Airport in Tanzania, from where she was transferred by truck to her new home.

Our next passenger weighs 900kg & is flying from #CZ to #Tanzania with DHL. Follow Eliska´s story #DHLRhino pic.twitter.com/E3Ktj5yKB8

Přemysl Rabas, Statutory Director of ZOO Dvur Kralove (Eliska’s former home) said they were going to miss her sourly but they also took consolation in the fact that she gets to grow in an ambience that is better for her development.

“Eliska’s departure is a bitter-sweet moment for ZOO Dvur Kralove. We are sorry to say goodbye to one of our much-loved animals, but at the same time, we are extremely gratified to have played a part in this important conservation project and excited to see how she adapts to her natural habitat,” he said

DHL and transportation of wildlife species across the world

DHL, global giants in freights and commercial transport have in the recent past upped their efforts in the area of transporting, with safety and security, endangered species across the world.

The company has supported a number of major conservation projects in recent years, among others:

“As facilitators of global trade, it’s fantastic that we can use our logistics expertise for such an important conservation project, and we trust that Eliska will flourish in her new home in Africa,” the words of Hennie Heymans, CEO, DHL Express Sub Saharan Africa.