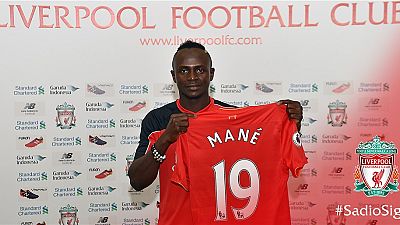 Senegalese international Sadio Mane has joined Liverpool on a five-year deal from Southampton, the Premier League club said on Tuesday.

The 24-year old moved to Jurgen Klopp’s side after two successful seasons at Southampton, netting 25 goals in 75 appearances in all competitions.

According to British media reports, Liverpool paid 34 million pounds ($45 million) for his services.

“It’s a club that has won a lot of trophies and has a big history,” Mane told the club’s website.

“Now I am looking forward to meeting all the staff and my team mates and starting the season,”

Mane is Liverpool’s fourth signing of the summer after Joel Matip joined on a free transfer from Schalke, Marko Grujic left Red Star Belgrade, and goalkeeper Loris Karius was bought from Mainz.

He will officially become registered as a Liverpool player on July 1 and will wear the No 19 shirt.

Mane has scored 10 goals in 36 appearances for Senegal.