Zuma should learn from Cameron and 'exit' - Opposition 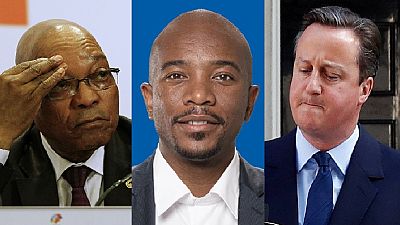 Maimane was speaking at a press conference in Durban‚ on the “Brexit” vote and how it would hurt South Africa’s economy. He said the situation was made worse because the country’s economy was being “bogged down” by Zuma’s lack of leadership, policy indecision and corruption.

He added that Cameron’s decision to step down follow the historic referendum “Brexit” vote should serve as an example to President Jacob Zuma.

David Cameron's 'honourable' resignation should be a lesson to Zuma: Maimane https://t.co/IO8xJ05P9w pic.twitter.com/XUbjkVwDVW

Zuma has been hit by a series of court indictments in the recent past, the last one came last week when a Pretoria High Court, dismissed an appeal by Zuma and the National Prosecuting Authority (NPA) relating to the need to reinstate over 700 corruption charges against him.

Meanwhile, in a statement issued on Friday‚ the Presidency said that the UK would remain an important trading partner for South Africa despite the vote. Last year‚ the UK was South Africa’s 8th largest trading partner‚ and exports to the UK totalled R41-billion. Imports from the UK were R35-billion.

“The National Treasury and the SA Reserve Bank have been in discussions with financial institutions on the possible implications for the South African economy.

Our banks and financial institutions are well positioned to withstand financial shocks to the system as demonstrated in previous episodes including the 2008/09 global financial crisis. We are therefore confident that our financial system including the banks and the regulatory framework are extremely resilient and reliable‚” the Presidency said.