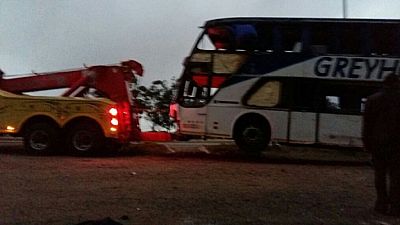 Some 50 Zimbabweans have sustained varied degrees on injuries in an accident on one of South Africa’s most busiest streets. The N1 highway.

The incident which occured around 2am happened when the driver of a greyhound bus they were travelling in lost control and overturned near Luis Trichardt town in South Africa’s Limpopo Province yesterday.

The accident happened a few kilometers from the town’s Central Business District along the N1 Highway.

According to Zimbabwe’s Herald news portal, ‘‘the bus was travelling from Johannesburg to Bulawayo, with 50 people on board, including the bus crew.’‘

Verifications have been done and most of them are Zimbabweans who were travelling from Johannesburg.

The portal futher quotes Limpopo police spokesperson, one Colonel Moatse Ngoepe, as having confirmed the incident, adding that doctors were still assessing the nature of injuries to the victims at Luis Trichardt Memorial Hospital.

Even though no deaths were reported, “Further investigations into the accident are still in progress. Some of the people were seriously injured while others have minor wounds. Verifications have been done and most of them are Zimbabweans who were travelling from Johannesburg,” the police spokesperson said.

Accidents along that road are not new, about four months back, four family members were killed while two others were critically injured when a Land Rover they were travelling in was involved in a head-on collision with a haulage truck along the N1 Highway between Makhado and Musina towns in South Africa.

Reports have it that, some 40 Zimbabweans have been killed in road accidents between Johannesburg city and Musina town in the last six months.

The Highway’s importance is underlined by the fact that it links South Africa to the rest of Africa, and it is the route which handles a lot of commercial cargo movement. It has long been seen as a death trap for Zimbabweans and citizens of countries north of the Limpopo and Zambezi rivers.