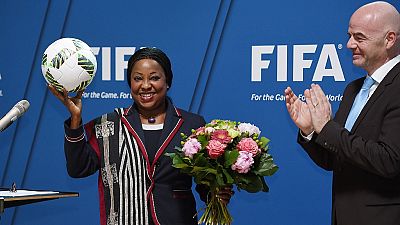 Just over six weeks after the 66th FIFA Congress – where she was appointed as the first woman and the first non-European to act as FIFA Secretary General – Fatma Samoura enjoyed her first day in office at the Home of FIFA in Zurich on Monday.

In between her first working meetings with FIFA President Gianni Infantino and members of the staff, the new Secretary General conducted an interview with FIFA.com to outline her views on some of the focal points of her administration.

“I want to inject diversity, more equity, a better governance structure, a stronger monitoring and evaluation system and an obligation to inform and report on the good deeds of FIFA,” Secretary General Samoura said.

FIFA.com: What will be your main priorities in your first weeks at FIFA?

Secretary General Samoura: My first priority is to finalise the staff review and to have the senior executive staff appointed as soon as possible. This really concerns very strategic positions, namely those of the Chef Financial Officer and the Chief Compliance Officer, but also human resources, communications and development. Those are key positions, for which we really need to identify good leaders, so that we may fully roll out the different programmes and visions of the new FIFA team.

My second priority is to try as much possible to focus on the staff, who have been going through extreme stress over the last 12 months because of the corruption scandals that have had a negative impact on the morale. So I am here to boost the morale of the staff. And my third priority is to ensure that the new directives that govern FIFA, which have been recently approved at the Congress, are internalised and rightly disseminated, so that the staff really starts getting used to them.

Finally, I want to inject diversity, more equity, a better governance structure, a stronger monitoring and evaluation system and an obligation to inform and report on the good deeds of FIFA.

FIFA.com:You come from a very different background. What do you think your long experience at the United Nations can bring to your new role at FIFA?

FIFA is the UN of football. It really works with people coming from different cultural, religious and racial backgrounds. But, more importantly, football is one of our biggest equalisers. It is a unifier. My creative challenge when taking up this position is: how we can link the work that I was doing with the UN – to restore peace and bring cohesion between fighting parties – and football. Because football is really a sport that can overcome those social, linguistic and religious barriers. Altogether, I think that I am not doing a different job. Yes, I am in a different field, but if you look at it from a development perspective, you can see many similarities between football and the work that I was doing in the UN – which was to put the individuals at the centre of the decisions of the organisation. This is pretty much the same experience of putting football into the centre of the decisions of FIFA.

FIFA.com:How do you intend to lead this administration, which has gone through turbulent times recently?

The audit forensics is ongoing, and hopefully the result of the financial audit will also be available very soon, so the legal proceedings will continue. While I know that we are only seeing the tip of the iceberg, I do not want these ongoing processes to be detrimental to the real goals and ambitions of the organisation. So I am trying as much as possible to ensure that the two aspects are dissociated, and that not everybody is focusing only on the legal aspect of the corruption matters, but that we all focus on FIFA’s day-to-day operations. It is my role to make sure that the errors of the past are not repeated by the new executive team, and for that we need to take lessons from the mistakes of the past and internalise the good practices.

Very happy to be at FIFA. Met my team, and the Management team this morning. Getting down to work! pic.twitter.com/vTCd9ItOLV

FIFA.com:You are the first woman and non-European to occupy the role of Secretary General at FIFA. How do you think this will translate into your management style and priorities?

For me, having a woman leading the governing body of world football, an area that has traditionally been dominated by men, is a strong signal of how the President is embracing diversity. So my touche – as we say it in French – as a woman is to ensure that there is more equity not only in the way we recruit people – which means having more females in the executive level of FIFA – but also in how a game that embraces all communities may have a special focus on women. Women are 50 per cent of humanity, and no institution can fully reach its goal if it decides to sideline 50 per cent of the population.

FIFA.com:Finally, what is your favourite football memory?

Well, I guess my answer will be upsetting many French people, because as a national from Senegal my best memory in football was when the Senegalese defeated France 1-0 in the opening of the 2002 World Cup. That was when Senegal took part in this big event for the first time, and we were simply beating the team that had been crowned as world champion four years before. For my people, when we won that game it was like we had become champions of the world. So that was a very emblematic team, of great memories for Senegalese football and for the people of Senegal.