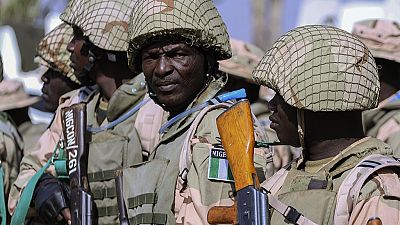 Nigerian Army has rejected media reports about mass retirement of senior army officers in the past week.

Acting Director of Army Public Relations, Col. Sani Usman in a statement said only 38 officers were retired in the recent disengagement exercise and not 100 as earlier reported in some media.

We wish to state that only 38 senior officers were affected by the retirement exercise.

This is worrisome as some individuals and media houses went to the ridiculous extent of publishing outrageous figures and names of serving officers as being retired.

The statement added that only 19 officers above the rank of Brigadier Generals were sacked.

“The statistics of officers retired compulsorily are 9 Major Generals, 10 Brigadier Generals, 7 Colonels, 11 Lieutenant Colonels and a Major,” it said.

The statistics of the officers retired compulsorily are as follows; 9 Maj Gen, 10 Brig Gen, 7 Col, 11 Lt Col and a Major.

Col. Usman expressed contempt with the “speculation and rumours” regarding the number and names of the senior army officers affected in the recent retirement exercise.

“This is worrisome as some individuals and media houses went to the ridiculous extent of publishing outrageous figures and names of serving officers as being retired. This is unethical and unfair,” he said.

He called on the public to disregard the inaccurate list.

Nigerian Army also denied allegations that those affected by the recent retirement exercise were deliberately pooled from a section of the country to further advance a “northern agenda”.

The army had come under fierce criticism following claims that some senior officers were forced to retire because they were from the Southern part of the country and loyal to the former president, Goodluck Jonathan.

However, the Army in a statement said the exercise was carried out in strict compliance with the country’s laws.