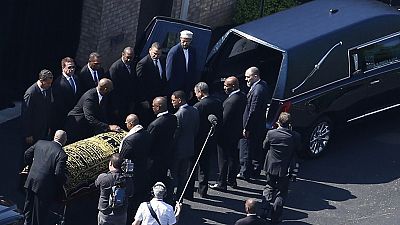 Thank you for joining us for #MuhammadAliFuneral

42nd President of the United States Bill Clinton was the last speaker on the night #AliMemorial #MuhammadAliFuneral pic.twitter.com/yPd4EsruPo

“I always think of Muhammad as a true free man of faith” – Bill Clinton pic.twitter.com/4LmCCJux3A

“It is the choices #MuhammadAli made that have brought us all here today,” Bill Clinton #MuhammadAlifuneral pic.twitter.com/PMAnBRknzx

Billy Crystal delivering his tribute to Muhammad Ali
“Ali was the most perfect athlete you ever saw, those were his words” – Billy Crystal

“Ali was the most perfect athlete u ever saw, those were his words” – Billy Crystal #MuhammadAlifuneral #AliFuneral pic.twitter.com/Ksknrgi0Nx

Muhammad Ali FACT
He was given a Presidential Medal of Freedom in 2005 by the then President George Walker Bush.

Muhammad Ali QUOTE
“I always bring out the best in men I fight, but Joe Frazier, I’ll tell the world right now, brings out the best in me. I’m gonna tell ya, that’s one helluva man, and God bless him.“
A victorious Ali after the ‘Thrilla in Manila’

Maryum Ali recites “Thank you our dear Father” a poem she wrote in honour of #MuhammadAli pic.twitter.com/fwiqec4C9d

Lonnie Ali, wife of Muhammad Ali delivers tribute
Touches on his life in general, lauding his ideals and his principles, thanking all present and people the world over for the out poor of love, with special mention of social media tributes.

#MuhammadAli's wife, Lonnie: 'America must never forget that when a cop & inner city kid talk to each other, miracles can happen'

Muhammad Ali's wife, Lonnie: 'America must never forget that when a cop & inner city kid talk to each other, miracles can happen'

“He stunned the world when he secured the release of 15 hostages from Iraq” Lonnie Ali, wife #MuhammadAlifuneral pic.twitter.com/eVNUvWw6r0

#MuhammedAli challenged his govt but he never run from it, or from America – Wife Lonnie Ali #MuhammadAlifuneral ends tribute to ovation

The FULL program lineup for the event, better late than never
At least it helps us know that President Bill Clinton is the last man on the bill.

#MuhammadAli was one of the golden generation of men bequeathed to me by my dad, my dad loved him like a younger brother – Atallah Shabbazz

Christian, Muslim, Jews, we're all one people, if you love God, you can't love some of HIS children – Malcolm X daughter #MuhammadAlifuneral

Having #MuhammadAli in my life prolonged my dad's breath for me a while longer – Amb. Attallah Shabazz, Daughter of Malcolm X

Rabbi Michael Lerner, tough talks at Public Memorial, suggests Hillary Clinton will be next US president

“We will not tolerate politicians putting down Muslims and blaming them for a few people – Rabbi Lerner #MuhammadAli pic.twitter.com/1GXUxKRc6E

Before “black and proud” was said #MuhammadAli had long said “I'm proud and pretty” – speaker at #MuhammadAlifuneral pic.twitter.com/loKTWcRmFp

“He is the product of black people in their struggle to be free” #MuhammadAli #LIVE online https://t.co/h07ZvLTdhg pic.twitter.com/s3yyOKJbTn

President Bill Clinton introduced to loud cheers of “Ali! Ali! Ali! The mayor of Kentucky has also been introduced

19:00 MUHAMMAD ALI PUBLIC MEMORIAL KICKS OFF!!!
Private burial has ended. The public memorial at the KFC Yum Center has just started, guests are filing into the packed hall. Former US President Bill Clinton is expected to deliver a tribute along with other dignitaries.

Muhammad Ali FACT
In 1984, Ali was diagnosed with Parkinson’s syndrome that apparently was linked to his career. The disease left him slow, shaky and unable to speak much above a whisper but close associates said he never lost his sense of humor or zeal for his faith.

Muhammad Ali QUOTE
“I done wrestled with an alligator, I done tussled with a whale; handcuffed lightning, thrown thunder in jail; only last week, I murdered a rock, injured a stone, hospitalised a brick; I’m so mean I make medicine sick.“
Before the ‘Rumble in the Jungle’

He shook up the world, and the world's better for it. Rest in peace, Champ. pic.twitter.com/z1yM3sSLH3

The White House had earlier released a message signed by the president in memory and honour of Muhammad Ali, arguably the greatest American athlete in a long while.

BREAKING!!!
Ali’s procession ends, hearse enters cemetery for private funeral session to begin. A public memorial at the KFC Yum Center follows after, stay with us. His parents were also buried in the same cemetery.

Draped with cloth from Holy City of Makkah on request of Erdogan Reports say Turkish president Erdogan asked for cloth used to drape the coffin bearing his body to be brought from Makkah, the Islamic holy city in Saudi Arabia. Ali himself has a link with the city of Makkah, having undertaken the Islamic pilgrimage to Hajj after he became Muslim in 1963, joining the the Nation of Islam.

Prayers from the Holy City of #Mecca (Makkah) for our #Muslim hero #MuhammadAli
May Allah's mercy shower his soul pic.twitter.com/75Y9Fti1RI

Muhammad Ali FACT
Ali was named the top sportsman of the 20th century by Sports Illustrated magazine, he would go on to meet world leaders such as Queen Elizabeth, Nelson Mandela, Pope John Paul II, Fidel Castro and Saddam Hussein.

Muhammad Ali QUOTE
“I never thought of losing, but now that it’s happened, the only thing is to do it right. That’s my obligation to all the people who believe in me. We all have to take defeats in life.“
After losing to Ken Norton in 1973

Thursday (June 09) Islamic Prayer held for Ali
On Thursday, an estimated 14,000 attended Ali’s Islamic prayer service. In attendance was Turkish president Recep Tayyip Erdogan, who is also expected to be at the interdenominational tribute event that follows the ongoing procession.

A funeral planned by Ali himself, procession ongoing
The over 15 limousine cortege is still going through the streets of Louisville, with the mortal remains of the town’s most famous athlete. His funeral was planned out by himself for over 10 years

“The plans are specified by Muhammad Ali, that’s the bottom line. This is a 10-year plan that a small group of advisers had worked on. And these are Muhammad’s wishes. What you’re seeing are Muhammad’s wishes and he had a hand in all the planning.” – family spokesperson Bob Gunnell.

Muhammad Ali planned his #funeral 10 years ago. Would you want to plan your own funeral rites? pic.twitter.com/MgIrPO8vh0

Muhammad Ali “THE MUSLIM”
Muhammad Ali FACT
In 1963, Ali converted to Islam even though he was born a baptist, he has been described as the greatest American Muslim. His names are two of the most popular “Muhammad” – name of the final prophet and “Ali” – the fourth and final caliph of Islam.

Muhammad Ali QUOTE
“What’s really hurting me – the name Islam is involved, and Muslim is involved and causing trouble and starting hate and violence. Islam is not a killer religion, Islam means peace. I couldn’t just sit home and watch people label Muslims as the reason for this problem.“
In the aftermath of the 2001 World Trade Center attacks.

Muhammad Ali FACT
Ali’s career record was 56 victories, 37 of them by way of knockout, and five losses.

Official biographer, Thomas Hauser
Ali was deeply spiritual and he was a generously nice man, it was difficult to imagine a rude ALi, he probably signed autographs than anyone else who lived. It’s a time of mourning and also a time of celebration. He should be remembered as someone who championed peace and love.

“It takes seconds to scribble my name but that person will live the rest of their lives adoring my gesture,” Ali would say

Muhammad Ali QUOTE
To make America the greatest is my goal, so I beat the Russian and I beat the Pole. And for the USA won the medal of gold. The Greeks said you’re better than the Cassius of old.
After winning Olympic light-heavyweight gold medal at the 1960 Games in Rome.

14:30
Black hearse being driven through the streets of Louisville. People lined across the street chanting Ali! Ali, Ali, Ali Some throwing flowers as the hearse passes.

Hundreds of fans have lined up to honor Muhammad Ali at his funeral procession (via PaulMiles84)https://t.co/1DKiLpTdVY

Information
Among his pall bearers, entertainer Will Smith, Mike Tyson and other acquaintances

Will Smith and Mike Tyson among pall bearers of #MuhammadAli #MuhammadAlifuneral pic.twitter.com/9CSEDFTpQL

14:20 GMT
His casket draped with Islamic calligraphy cloth is taken from the funeral home into a hearse. The funeral has officially started.

The ceremony in his hometown of Louisville, Kentucky is in two parts:

a. A funeral procession through Louisville before a private burial.
b. A public memorial at the KFC Yum Center.

The list of celebrities are certainly not lightweight plus the hundreds of thousands of boxing fans who either watched him display his artistry at ringside or on their television screens, all get a bite of the ‘action.’

People from all walks of life, who admired Ali as a man will on Friday (June 10) in his Kentucky hometown, bid him a final farewell. The tough talking, hard hitting and much loved global figure died a week ago at age 74.

9 a.m. (1300 GMT): Funeral procession in Louisville starts at his body will be sent to Cave Hill National Cemetery for a private burial.

Global leaders expected include: Jordan’s King Abdullah and Turkish President Tayyip Erdogan (the latter was present at the Muslim prayer on Thursday)

Louisville Mayor Greg Fischer told a news conference; “Now as the world continues to flow into our city, it’s time for us to send him off tomorrow with great class and dignity and respect.”

“The world will literally be watching tomorrow as Muhammad’s processional and memorial service are broadcast to a global audience,” he added.