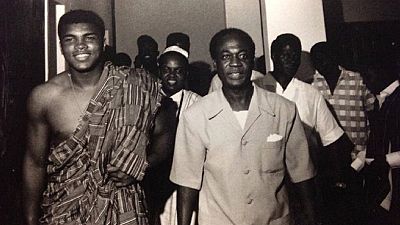 Muhammad Ali may have died but the memory of the boxing legend would live on for a long time to come. One of the greatest promoters of the pugilist sport Don King is reported by the CNN to have said, “He will never die. His spirit will go on forever.”

Ali had a link with the African continent especially because one of his greatest boxing bouts that he fought was on African soil, the infamous ‘‘Rumble In the Jungle’‘ with George Forman in the then Zaire (Today, the Democratic Republic of Congo)

The boxing fight that took place in 1974 was held at the 20th of May Stadium on the night of October 30, 1974. At the time Ali (the challenger) was facing Foreman, the undefeated heavyweight champion.

With an attendance of some 60,000 drawn from all over the world, Ali won by a knock out, flooring foreman just before the eighth round ended. In a fight that has been labeled, ‘‘arguably the greatest sporting event of the 20th century.’‘

He will never die. His spirit will go on forever.

The fight was one of Don King’s first ventures as a boxing promoter, with the bushy haired promoter moving on to promote other several boxing greats. The fight was said to have been funded by the then Zairean president Mobutu Sese Seko.

The fight was broadcast on Closed Circuit Television in Theaters in the United States and on Over the Air Television for a global audience.

African leaders across the continent have been tweeting about Ali from Senegal to Gabon, Ghana to Kenya and beyond. The Gabonese leader Ali Bongo Ondimba shared a throwback picture involing him and his father with Muhammad Ali.

Ali visited the Rainbow Nation in 1993 and met the great anti apartheid leader Nelson Mandela. The ruling Africa National Congress (ANC) also tweeted a condolence message directed at both legends, the politician and the sportsman.

Ali in Ghana, Nkrumah and Kente

Ghana’s President John Dramani Mahama, tweeted a picture of Muhammad Ali with Ghana’s first president Kwame Nkrumah during a visit of the boxing champion to the West African nation in 1964.

It is reported that even though he was met at the airport by Ghana’s foreign minister, Kojo Botsio, Nkrumah chaperoned him for the most time of his visit, he also received a gift of colourful Kente cloth from the then Ashanti king (King Prempeh) when he visited Kumasi in the Ashanti region.

Reports indicate that Nkrumah even added a local name ‘Kwame’ to his name.

Sad to hear the passing of Muhammad Ali. He was our hero and truly 'the Greatest'. pic.twitter.com/hIgHhd0KbX

‘‘In all, Ali spent two weeks in the country, visiting a lot of places, having talks and being chaperoned by an awe-struck Nkrumah. In Kumasi, the boxer had a similarly crazy reception, and he lapped it up, including meeting the Asantehene, Prempeh II,’‘ sports journalist Gary al-Smith of Joy FM wrote in a piece.

The Kenyan President and his deputy President have both tweeted about Muhammad Ali, same as the President of Senegal, the African Union Chairperson and other African sportsmen and personalities.

Muhammad Ali was not only a great boxer, I celebrate him as an inspiration and a peacemaker. He left footprints of true greatness on earth

The death of legendary boxer MuhammadAli has robbed the sporting world of an icon. May his soul RIP. pic.twitter.com/vchU8OKBgy

RIP #MuhammadAli, “The Greatest”. Sincere condolences to his family, friends, fans, all over the world!

Muhammad Ali threw not just boxing punches, he also threw verbal punches and the press widely covered that, from his times in the ring till long after he had bowed out of the sport.

We bring you a selection of the many one-liners, witty jabs and verbal diatribes that Ali threw before and after his fights. The boxing legend also speaks not only of his opponents but he did also of his political and religious beliefs.

“To make America the greatest is my goal, so I beat the Russian and I beat the Pole. And for the USA won the medal of gold. The Greeks said you’re better than the Cassius of old.“
After winning Olympic light-heavyweight gold medal at the 1960 Games in Rome.

“Why, Chump, I bet you scare yourself to death just starin’ in the mirror. You ugly bear! You ain’t never fought nobody but tramps and has-beens. You call yourself a world champion? You’re too old and slow to be champion! I’ll hit Liston with so many punches from so many angles he’ll think he’s surrounded. I shook up the world! I shook up the world!“
After beating Liston.

“I never thought of losing, but now that it’s happened, the only thing is to do it right. That’s my obligation to all the people who believe in me. We all have to take defeats in life.“
After losing to Ken Norton in 1973.

“I’ve seen George Foreman shadow boxing and the shadow won.“
Before knocking out Foreman in their famed ‘Rumble in the Jungle’ clash in 1974.

“I done wrestled with an alligator, I done tussled with a whale; handcuffed lightning, thrown thunder in jail; only last week, I murdered a rock, injured a stone, hospitalised a brick; I’m so mean I make medicine sick.“
Before the ‘Rumble in the Jungle’

“The fight is won or lost far away from witnesses – behind the lines, in the gym, and out there on the road, long before I dance under those lights.”
The duels with Frazier

“I always bring out the best in men I fight, but Joe Frazier, I’ll tell the world right now, brings out the best in me. I’m gonna tell ya, that’s one helluva man, and God bless him.“
A victorious Ali after the ‘Thrilla in Manila’

“Float like a butterfly, sting like a bee, his hands can’t hit what his eyes can’t see. I am the greatest! I’m not the greatest, I’m the double greatest. Not only do I knock ‘em out, I pick the round. I’m the boldest, the prettiest, the most superior, most scientific, most skilfullest fighter in the ring today.”

“Nobody has to tell me that this is a serious business. I’m not fighting one man. I’m fighting a lot of men, showing a lot of ‘em, here is one man they couldn’t defeat, couldn’t conquer. My mission is to bring freedom to 30m black people.”
Before Ali’s fight against Jerry Quarry in 1970.

“What’s really hurting me – the name Islam is involved, and Muslim is involved and causing trouble and starting hate and violence. Islam is not a killer religion, Islam means peace. I couldn’t just sit home and watch people label Muslims as the reason for this problem.“

In the aftermath of the 2001 World Trade Center attacks.