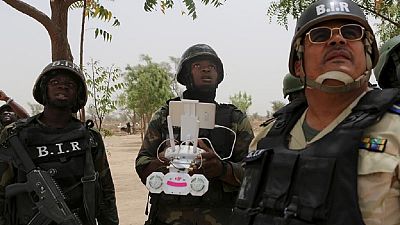 In a French military base outside Niger’s capital Niamey, an ongoing anti-insurgent operation is underway.

Dubbed operation Barkhane, French troops are now using drones to patrol the skies of northern Niger to target Islamist militants from al-Qaeda and Boko Haram who often carry out attacks in the West African country.

The government of President Mahamadou Issoufou has been struggling to stem a flow of insurgents across Niger’s lightly guarded borders with Mali, Nigeria and Libya.

The use of the drones to tackle the extremist groups is one of the latest technologies adopted by the west African nation to fight off the insurgent groups that have been carrying out cross-border attacks.

Even so, Niger has made efforts in tackling insecurity to counter the risk of Islamist incursions from its neighbours.

The country is working alongside its neighbours, including Chad, Cameroon and Nigeria, to put together a joint strategy to end the threat posed by Boko Haram.

Boko Haram violence has left at least 20,000 dead and forced more than 2.6 million from their homes since the group launched its insurgency in Nigeria and later in neighbouring countries in 2009.

Nigeria has now united with its neighbours to stamp out Boko Haram. An 8,700-strong regional force of troops from Benin, Cameroon, Chad, Niger, and Nigeria is seeking to finish the job. Outside Nigeria, Cameroon has been hardest hit by Boko Haram, which now operates out of bases in the Mandara Mountains, Sambisa Forest and Lake Chad.