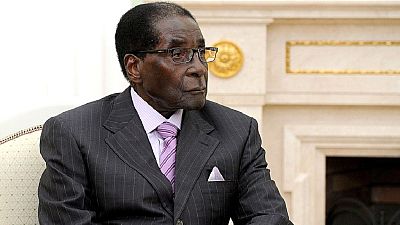 The Delegation comprised among others, the Governor of the Reserve Bank of Zimbabwe, John P. Mangudya, and other officials from the Ministry of Finance and Reserve Bank.

The group gave an update of the progress made in view of an upcoming meeting scheduled to take place in Lusaka, Zambia.

Chinamasa at the meeting briefed President Adesina on the difficult economic situation of Zimbabwe, which requires immediate action.

The meeting also examined the progress made with the IMF staff monitoring programme, particularly in the areas of fiscal consolidation, financial governance, economic and land reforms.

They also discussed the recent policy measures put in place by the Monetary Authorities to curb capital flight from Zimbabwe and measures to promote production and exports in view of the global external factors of declining commodity prices and the strong USD.

President Adesina welcomed the measures as critical, especially now that the country is on the verge of completing its re-engagement process.

Adesina congratulated Minister Chinamasa for his leadership in the re-engagement process, and reassured him that the AfDB will continue to support the country, including through its private sector window, in providing energy, feeding the population, rehabilitating the infrastructure and reviving the industry adding that Zimbabwe is key in the region.

Chionamasa further updated Adesina on the financial arrangements which will be presented in Lusaka made by the country to clear its arrears. He also stressed the importance of a time line for concluding the process with the IFIs in order to consolidate the gains made on the reforms.

3 days, 8 hours and 18 minutes to go before the #AfDBAM2016 kick off in Lusaka! https://t.co/8ipmLKpN7Z pic.twitter.com/Zp4FjyRwsP