A six-meter high statue of the late South African leader, Nelson Mandela, has been unveiled in the Palestinian city of Ramallah.

The bronze statue of Mandela, smiling with his fist up in the air, weighs two tonnes.

It is a gift from the city of Johannesburg to the West Bank city which is home to the Palestinian administration.

I think that Nelson Mandela himself would have been extremely proud of what has been done today.

“I think that Nelson Mandela himself would have been extremely proud of what has been done today,” Johannesburg’s Mayor, Parks Tau said.

Palestinian president Mahmoud Abbas and several other dignitaries were present for the unveiling of the statue in the upscale area of Al-Tireh.

Palestine was critical of the apartheid system in South Africa which it said was imposed by Israel.

Authorities say the statue symbolizes the shared suffering of South Africans and Palestinians.

“This statue reminds us of the personality of Nelson Mandela, who took the side of the Palestinian people even during most difficult moments of his life, when he was in prison. He had a strong relationship with the Palestinian revolution,” said Mayor of Ramallah, Musa Hadid.

Ramallah and Johannesburg are twin cities.

Musa Hadid said with Mandela’s statue, Ramallah intends to send a “clear message to the colonizer and occupier, Israel: we are much closer to freedom than you think.” 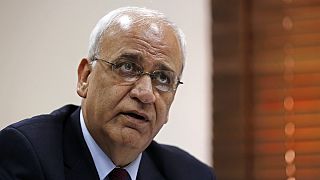