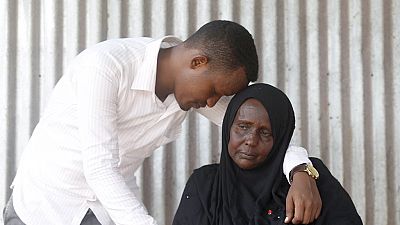 Faduma Farah does not know where her son is. Sitting outside her house in Somalia’s capital, Mogadishu, she cuts a worrying look.

Up to 500 people are believed to have died recently when an overcrowded boat sank in the southern Mediterranean sea. But her son is neither in the list of survivors nor the dead.

Faduma describes her enthusiastic son who wanted to get to Europe to uplift their living status.

We cannot have a funeral because we still do not know if he is in jail, if he is dead or if he survived.

“My son wanted to go to Europe. He wanted to work there and change my life from poor to good. He was in Egypt for some time. On the afternoon of April 7 at about 5pm he called me and said, ‘Mum pray for me. I am setting off by boat on the sea.’ That was the last time I heard my son’s voice.”

In Somalia, news of the disaster started to filter through on April 17. Farah’s family say they need to know for sure if he survived or if he died so they can move on with their lives.

“We are requesting the Egyptian government to clarify the state or whereabouts of all who were on board the boat that sunk. We also want confirmation from the Somali government. We want to know if my brother is dead or alive. We cannot have a funeral because we still do not know if he is in jail, if he is dead or if he survived. We have not had confirmation for over 15 days. We want a list with the full names of the people who were on the boat, those who died and those who survived. If we could get this, then we can make a decision and our hearts can finally be at ease,” Fartun Farah, sister of Mohamed Farah, the missing migrant, told Reuters.

According to UNHCR over 179, 000 refugees and migrants have reached Europe by sea across the Mediterranean and Aegean this year. At least 761 have died or gone missing attempting the journey.

UNHCR continues to call for increased regular pathways for the admission of refugees and asylum-seekers to Europe, including resettlement and humanitarian admission programmes, family reunification, private sponsorship and student and work visas for refugees. These will all serve to reduce the demand for people smuggling and dangerous irregular sea journeys.